BILLY Bluelight was a Norfolk eccentric who – in the absence of a welfare state lived on his wits and his charm. This most iconic of characters was famous for racing the steam pleasure boats along the River Yare from Bramerton to Norwich – hoping for spare change from the passengers on board.

At half past eleven or so every morning, the tinkle of a bell would intrude upon the cooing of the wood pigeons; it heralded the approach of the Yarmouth Belle or the Waterfly, both deep in the water as a result of their heavy freight of Yarmouth trippers, all bound for Norwich.

As if on cue, a strange figure would appear on Bramerton’s river bank and take up a familiar stance. Clad in shorts and a singlet and hung with a prodigious array of medals, his expansive smile, matched at a higher level by the peak of his gaily-striped cricket cap. From the river bank he would call out:

“My name is Billy Bluelight, my age is 45, I hope to get to Carrow Bridge before the boat arrive.”

With these words, he would sprint off along the river footpath of the Yare. At Woods End he would be no more than level, but once out of sight he always gained by taking a short cut across the Whitlingham Sewerage Farm, to reappear still neck and neck by the time both man and boat had reached the old limekiln at Crown Point. There, Billy would again disappear from view, and while the boat passed very slowly through unsuitable bends and narrow waters, Billy would make a detour over Trowse Bridge. By the time Carrow Bridge was reached, there would be Billy, ready to receive the well-earned plaudits of the trippers and the coppers thrown on to the path by the Boom Tower.”

Year after year this performance was repeated, but Billy’s age remained 45! This may have been for the sake of the rhyme, but there was enough of the Peter Pan in him to have justified it on other grounds.

Bluelight, whose real name was William Cullum is one of many interesting ghosts that still lingers on the 35-mile route along the Yare from Norwich to Great Yarmouth. He was born in the slums of his home city of Norwich, eking out a living selling cough medicine, firewood and blackberries. He never received a formal education, but he did however teach himself to read and worked briefly at Caley’s chocolate factory. By 1907 he was already legendary for his racing and street selling activities and continued racing boats

into the 1930s, when he was considerably older than 45 – He is said to have remained ’45’ for many, many years. He never married and lived with his mother, until her death around 1930. The two lived at several addresses in the city including Oak Street, Colegate and Pkyerell House at St Mary’s Plain. After his mother’s death, he was reported to have entered Woodlands, part of the West Norwich Hospital. By the 1940s he was living at Palmer Road on the Mile Cross Estate which was built between the wars. In his eighties he entered the West Norwich Hospital and was later moved to St James Hospital at Shipmeadow, Suffolk where he died in 1949. Five years after his death, writer R L Potter wrote this description of him:

“That over-worked term ‘nature’s gentleman’ was never better exemplified than in the gentle, unpretentious character called Billy Bluelight. It may seem astonishing that a humble little man could imprint his personality so widely on a large city, but it was so. ”

In 1994 Woodforde’s Brewery renamed their outlet The Freemasons Arms in Hall Road, Norwich to The Billy Bluelight, but since March, 2005 and after a change of ownership, the pub reverted to its former name. However, close to the Woods End Inn in Bramerton and on the Wherryman’s Way long-distance footpath stands a life-size statue of Billy. This particular footpath is named after the men who operated the distinctive flat-bottomed sailing barges that were the HGVs of the 1700s, when Norwich was England’s second city, and a prodigious amount of cargo was ferried between the Low Countries and Norwich via the Yare. This was thirsty work and its legacy, happily, lingers in an unusual wealth of riverside pubs, there to refresh the walker en route – although never Billy Bluelight, who was teetotal. 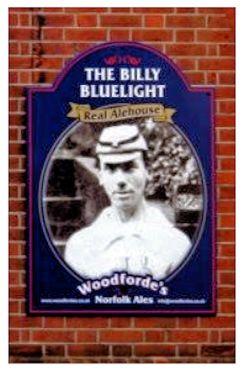 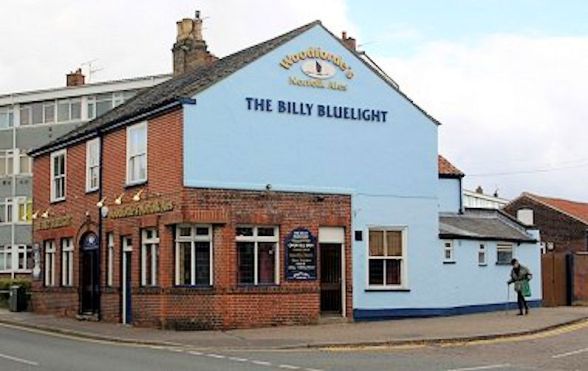 Many theories have been put forward to how he received his name. In 1907, a reference was made to the ‘bluelight’ of his eloquence; another suggestion was that of his blue nose in winter, or that he sold blue-tipped matches. ‘Bluelight’ was also a Victorian term for teetotaler or temperance worker and William Cullum did speak out against the dangers of alcohol.

There have been several reminders of him in the Norwich area over the years since the days when he graced the River Yare and Norwich, from a pub, a statue and the Crude Apache theatre company’s play about his life in recent times, entitled “Nature’s Gentleman – The Story of Billy Bluelight.”