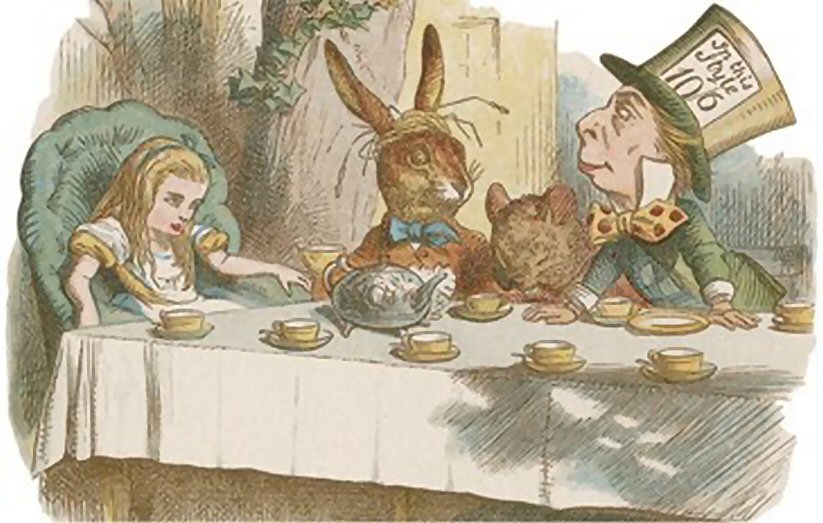 On the 31 March, 2018, The Field magazine published an article titled ‘Hare Mythology: Why We’re All Mad For Hares’. In it, Matthew Dennison explored and attempted to explode the mythology surrounding this iconic lagomorph. Those of our readers who do not take The Field would, probably, have missed this interesting article – an article that deserves repeating and given wider coverage, if only because we have long been fascinated by the hare – Britain’s fastest land mammal which is surrounded by myth and infamous for their ‘mad’ March courtship rituals. Apologies for a few minor tweaks to the original article, and for leaving out the advertising and other extraneous matter which only detracts from the article’s interesting content. Read on:

Hares have never failed to fascinate. Hare mythology has had an important role in our legends, stories and history ever since the Roman first introduced them to Britain, from the otherworldly White Hare of Cornish legend to the time Alice attended the Mad Hatter’s tea party courtesy of Lewis Carroll. And yet, hares are not confined to the pages of legend, myth and history. To see a pair boxing is to witness a spring rite of passage, but did you know that hares remain mad long after March?

In her bestselling novel of 1930, The Edwardians, the writer Vita Sackville-West evoked essentially unchanging English country life. Around the house at the centre of the novel – a loosely fictionalised version of her ancestral home, Knole – she imagined a parkland setting unchanged over many centuries: “The background was the same: the grey walls, the flag on the tower, the verdure of the trees, the hares and the deer feeding on the glades.” Like a vignette from a medieval hunting tapestry, the creatures that animate Sackville-West’s vision of timeless pastoralism are the quarry of the chase: deer and hare.

The brown hare is Britain’s fastest land mammal. Propelled by those powerful hind legs which define its shape as surely as its long, black-tipped ears, the hare has been known to run at speeds exceeding 40mph. Added to its shyness, this astonishing turn of speed accounts for the apparent elusiveness of the hare. Sighted only rarely in some areas for much of the year, it retains a mystique long forfeited by rabbits.

In hare mythology, the hare is a creature with pagan, sacred and mystic associations, by turns benign, cunning, romantic or, most famously, in its March courtship rituals, mad. It is largely silent, preferring to feed at night or, in summer, as the last light fades from the day, a shadowy existence which adds to its mysteriousness in hare mythology. In Alison Uttley’s Little Grey Rabbit stories the character of Hare is superior and strutting, occasionally pernickety, always aloof – a rendering for children of the animal’s natural reserve as well his appropriateness as a denizen of that world of aristocratic entitlement evoked by Sackville-West. For example, it is Hare who keeps Grey Rabbit up to scratch in the matter of housekeeping: “Where’s the milk, Grey Rabbit?” asked Hare. “We can’t drink tea without milk.”

In hare mythology and folklore, hares are invested with a similar remoteness. The otherworldly White Hare, which in Cornish legend wove a path between the fishing smacks of the county’s harbours at sundown, was thought to be either a warning of imminent tempest or the spirit of a broken-hearted maiden determined to haunt her faithless lover (a tempest of a different variety) and, in both cases, a sight to inspire foreboding and trepidation. In 1883, in the Folk-Lore Journal, William Black wrote that, “From India we learn that it is as unlucky to meet a hare as it is to meet a one-eyed man, an empty water-pot, a carrier without a load, a fox, a jackal, a crow, a widow, or a funeral.”

Such superstition surrounding hare mythology appears not to have been confined to India. A book on British folklore published in 1875 recognised the status of the hare as an associate of disaster, and recommended repeating, “Hare before, Trouble behind: Change ye, Cross, and free me.” In Visions and Beliefs in the West of Ireland, published in 1920, Lady Gregory recorded one of the most famous legends from hare mythology, despite its origins being not in Ireland but in Somerset. It concerned the trial for witchcraft in 1663 of an old woman called Julian Cox. A witness at the trial stated: “A huntsman swore that he went out with a pack of hounds to hunt a hare, and not far from Julian Cox’s house he at last started a hare: the dogs hunted her very close… till at last the huntsman perceiving the hare almost spent and making towards a great bush, he ran on the other side of the bush to take her up and preserve her from the dogs; but as soon as he laid hands on her it proved to be Julian Cox, who had her head grovelling on the ground and her globes (as he expressed it) upward. He knowing her, was so affrighted that his hair on his head stood on end; and yet he spake to her and ask’d her what brought her there; but she was so far out of breath that she could not make him any answer; his dogs also came up full cry to recover the game and smelled at her and so left off hunting any further. And the huntsman and his dogs went home presently sadly affrighted.”

The Romans are credited with introducing brown hares to Britain more than 2,000 years ago. If we are to believe the story of the Iceni queen Boudica consulting the entrails of a hare as an augury of victory in her uprising against the Romans in AD61, the animals had established themselves quickly. Their preference then as now was for open country and grassland, downs and flat marshlands. In succeeding centuries, farmland, particularly arable land, also proved popular with hares. Their chosen habitat is one that offers shelter in the form of long grass or heather; food in the form of herbs, grasses and cereal crops; and the broad expanses which afford a canvas for hares’ remarkable speed. Before the advent of hare coursing and beagling, that speed was exercised principally in escaping foxes, the hare’s principal natural predator. More recently, despite the greater speed of the sighthounds used for coursing, hares frequently outwitted their pursuers by their ability to turn and corner with unrivalled agility.

As with so many forms of British wildlife, today’s hares are threatened by changing agricultural practice. Larger fields with a single cereal crop a year curtail hares’ year-round food supply while offering them diminished cover, and their forms – shallow depressions in the ground – offer limited shelter and, potentially, a degree of exposure and vulnerability. A survey in 2008 estimated current brown hare numbers in Britain in the region of 800,000, a figure which represents a consistent if gradual decline since the Sixties. Unlike rabbits, hares are resistant to myxomatosis and have suffered no equivalent cull.

If few town-based people are fortunate enough to see a hare in the wild, there can be no Britons unfamiliar with its appearance. Today hare mythology has extended and the hare motif is to be found on fabric, wallpaper, cushions, lampshades and ties; it has been used as a letterhead, a heraldic device and in the design of stock pins, cuff-links, brooches and charms for bracelets.

Hare mythology and particularly the ubiquity of hares in children’s fiction and television programmes ensures a continual stream of merchandising. Hares remain a popular subject with sculptors and visual artists. Their spring-time “boxing”, a mating ritual in which unreceptive females fend off amorous males, lends itself to a degree of anthropomorphism which appeals to an art-buying public largely ignorant of the truth behind this “mad” March ritual, once thought to be a fight between males. Ceramic and porcelain hares have been made by the Munich-based Nymphenburg factory, the Lomonosov factory in St Petersburg and by Meissen. Contemporary animaliers, such as sculptors Rupert Till and Sophie Ryder and ceramicist Elaine Peto, explore a continuing fascination with these enigmatic creatures.

For an earlier arts audience hare mythology and the hare itself possessed a similar magnetism. An image of three running hares formed into a circle has been found in medieval churches, cathedrals and even inns across Britain. A floor tile dated to around 1400, found in the nave of Chester Cathedral, depicts a trio of hares separated by trefoil-shaped vegetation. Joined at their tips, their ears form a triangle, each hare apparently with two ears, though the tile artist has drawn only three in total.

Varying in sophistication and elaboration, this icononography characterises all the “three hares” of church architecture in Britain, from a late-15th-century carved wooden boss in the chapel at Cotehele in Cornwall to a stained glass roundel at Holy Trinity church, Long Melford in Suffolk, and a painted stone boss in the Lady Chapel of St David’s Cathedral in Pembrokeshire.

Research has failed to unearth any contemporary account of the symbolism of this recurring image, formerly dismissed as a popular signature among masons and carpenters. It is more likely that the intertwined imagery was intended to suggest the indivisibility of the Trinity. Another possible explanation is an association with the Virgin Mary, since hares were believed to possess hermaphrodite powers and therefore the ability to reproduce without loss of virginity. It is a far cry from the Romans’ perception of hares as symbolic of lust, abundance and fecundity: Pliny the Elder advocated a diet of hare as a means of increasing sexual attractiveness and also claimed that hare meat had the power to cure sterility.

If Pliny is right, the outlook for Britain’s birth rate is dim. Jugged hare, in which hare is stewed in wine and juniper berries and served with the last-minute addition of its own blood, has virtually disappeared from our tables. A recent survey conducted by a television cookery programme found that virtually no British youngsters recognised the dish and just as few would be willing to try it. The recipe is attributed to Hannah Glasse, who included it in The Art of Cookery, published in 1747: today it is chiefly confined to the ultra-traditional menus of London’s clubland.

With hare coursing banned in England and Wales in 2004, and fewer hares on British tables than at any point over the past three centuries, the chances of spotting boxing hares have never been so good. Here’s a tip for the tardy: the mating season of the hare is not confined to March; this “mad March” ritual is actually played out over a period of seven months from February to August, a treat for the sharp of eye. But, Lewis Carroll aside, none of the participants has been known to follow courtship with a tea party.