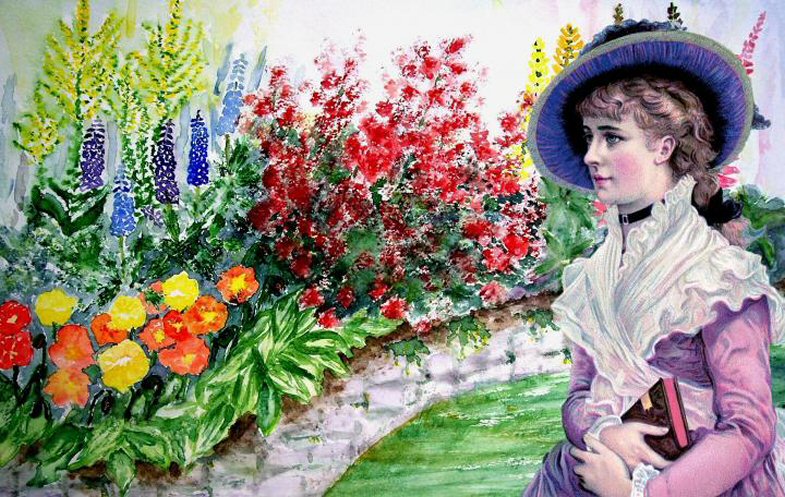 The Victorian era is famous for its nostalgia and love of sentimental customs. Many Victorian traditions had their roots going back hundreds of years and often included veiled references to Medieval Celtic folklore and pagan deities.  In the Victorian era, May Day, was May 1 and considered to be the middle of spring, and was marked with a fair, parade, dances, and lots of floral decorations.  The traditional celebrations often began with “bringing in the May”, which involved getting up very early in the morning on May Day, and going into the country to pick flowers to decorate the town. This was as well as making preparations for the parade and other festivities.  Women were also said to bathe their faces with dew from the grass and flowers on May morning, to preserve their beauty.

Flowers were woven into garlands and wreaths, posies for people to wear, and bouquets to fill May Baskets, which were heavily decorated and hung on doors around town.  Making and filling these baskets and then secretly delivering them to friends’ and neighbours’, knocking on the door and running away without being seen, was a favourite May Day amusement. If the recipient caught the one delivering the basket, they could claim a kiss!  During the Victorian era, it was also considered an exercise in true generosity, giving without expecting anything in return.

The parade was traditionally led by a May Queen, supposedly the most beautiful teenage girl in the village, who was crowned with flowers and attended by several other girls.  The girls all wore white, with flowers in their hair and danced and sang as they followed the May Queen, who wwould opened the fair with a speech.  According to folklore, the May Queen represented the Roman goddess Flora, or the Celtic Earth goddess, the personification of Spring, and it was considered an honour for a girl to be chosen.

Dances at the May Fair included traditional Morris dancing, which was performed by groups of men dressed in green and white with flowers on their hats, often with masks or painted faces; they tied bells to their legs which would ring as they danced with swords, sticks and handkerchiefs. The movements, costumes, and noise of Morris dancers symbolized scaring away evil from the community.

Dancing around a May pole was another type of dance for May Day; the Maypole was a tall pole erected in the middle of a clearing, decorated with flowers and long ribbons attached to the top.  Different age groups – especially children and the young adults – danced in specific patterns, each holding the end of a ribbon, and wove the ribbons in a pattern around the pole as they danced round and round. The May pole dance celebrated youth, fertility, and the changing of the seasons.

Other May Day activities included riding hobby horses in races, having archery tournaments, and feasting.  The May Day celebrations were often concluded with a bonfire and more alcohol, which led to more rowdy and less-proper entertainments like ribald songs and unrestrained sexual activity.  In response, proper Victorians minimized the connection with pagan religious tradition, and instead enjoyed the sunshine, flowers, giving gifts, and dressing up, with secular, community-oriented festivals that enabled people to take a break for some music, dancing, feasting and games.

Well dressing, also known as well flowering, remains a tradition practised in some parts of rural England in which wells, springs and other water sources are decorated with designs created from flower petals. The custom is most closely associated with the Peak District of Derbyshire and Staffordshire. The custom of well dressing in its present form probably began in the late 18th century, and evolved from “the more widespread, but less picturesque” decoration of wells with ribbons and simple floral garlands.

,The location identified most closely with well dressing is Tissington, Derbyshire, though the origins of the tradition are obscure. It has been speculated that it began as a pagan custom of offering thanks to gods for a reliable water supply; other suggested explanations include villagers celebrating the purity of their water supply after surviving the Black Death in 1348, or alternatively celebrating their water’s constancy during a prolonged drought in 1615. The practice of well dressing using clay boards at Tissington is not recorded before 1818, however, and the earliest record for the wells being adorned by simple garlands occurs in 1758.

Well dressing was celebrated in at least 12 villages in Derbyshire by the late 19th century, and was introduced in Buxton in 1840, “to commemorate the beneficence of the Duke of Devonshire who, at his own expense, made arrangements for supplying the Upper Town, which had been much inconvenienced by the distance to St Anne’s well on the Wye, with a fountain of excellent water within easy reach of all”. Similarly, well dressing was revived at this time in Youlgreave, to celebrate the supplying of water to the village “from a hill at some distance, by means of pipes laid under the stream of an intervening valley.” With the arrival of piped water the tradition was adapted to include public taps, although the resulting creations were still described as well dressings.

NOTICE: Wherever possible, we endeavour to obtain permission to use other copyright owners material on this site. Please note, no violation of any copyright or trademark material is ever intended.

One thought on “May Day and Victorian Spring Traditions”

Norfolk, United Kingdom
Please make use the appropriate buttons below to follow us on Facebook and to receive email notifications about new postings.
Join 369 other followers