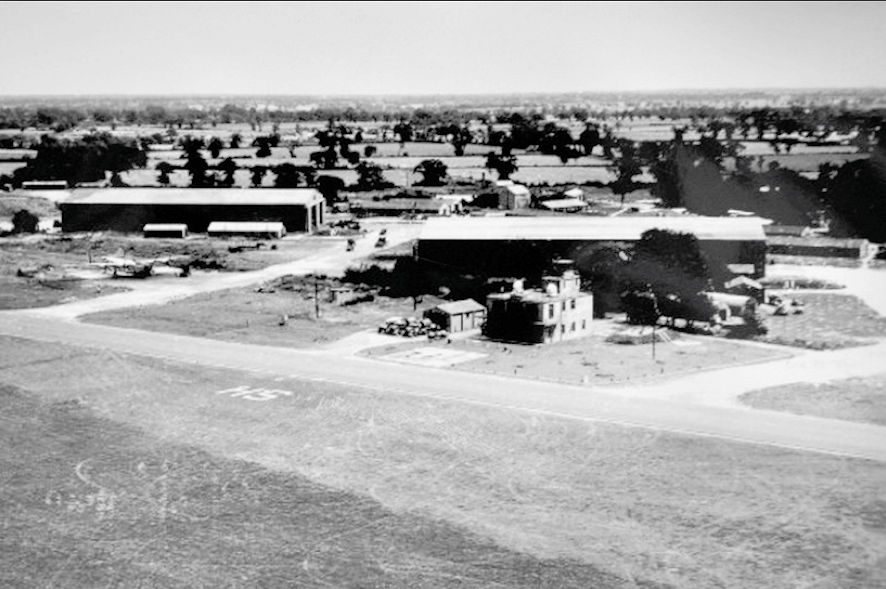 Shipdham lies approximately 3 miles south-west of East Dereham, Norfolk. The name derives from the Old English word for sheep – ‘sceap’ – hence ‘homestead with a flock of sheep’. Shipdham is sometimes confused with Shipden – the drowned village off the North Norfolk coast near Cromer. Shipdham was the first US heavy bomber base in Norfolk during World War II and was home to the famous B-24 Liberator bombers.

Hyam Plutzik was born in Brooklyn on July 13, 1911, the son of recent immigrants from what is now Belarus. He spoke only Yiddish, Hebrew and Russian until the age of seven, when he enrolled in grammar school near Southbury, Connecticut, where his parents owned a farm. Plutzik graduated from Trinity College in 1932, where he studied under Professor Odell Shepard. He continued graduate studies at Yale University, becoming one of the first Jewish students there. His poem “The Three” won the Cooke Prize at Yale in 1933.

After working briefly in Brooklyn, where he wrote features for the Brooklyn Daily Eagle, Plutzik spent a Thoreauvian year in the Connecticut countryside, writing his long poem, “Death at The Purple Rim”, which earned him another Cooke Prize in 1941, the only student to have won the award twice. During World War II he served in the U.S. Army Air Force throughout the Amerian South and in Norwich, England, experiences that inspired many of his poems.

In 1942, Hyam Plutzik enlisted in the U.S. Army, becoming first a drill sergeant then first and second lieutenant. During the war, he married Tanya Roth, who worked for the War Information Bureau in New York City. Numerous moves—twelve different cities and twenty different houses before going overseas—and the lack of private time in army life made it difficult for Plutzik to continue to write poetry. The only poem he was able to complete was “Elegy.” But he did create an outline for and composed the first twenty lines of the long poem, Horatio, that was finally published to much acclaim in 1961.

Before going abroad, he was stationed at many bases throughout the American South, where he witnessed first-hand the institutional racism of segregation and Jim Crow. His experiences in Louisiana and Mississippi inspired him to write a number of poems that expressed his disgust for the way the Negro was being treated, such as “To Abraham Lincoln, That He Walk By Day,” and “The Road.” After his deployment in the South, he was stationed at Shipdham c.1944-5 and became the Ordinance, Information and Education Officer for the 44th Bombardment Group of the USAAF. Even in wartime Britain, Plutzik found time to attend Shakespearean plays and visit literary landmarks. He also collected impressions that later led to the composition of some of his notable “war poems” such as “Bomber Base,” “The Airfield at Shipdham,” and “The Airman Who Flew Over Shakespeare’s England.” Like many servicemen, he wrote letters to his wife, parents, siblings and friends nearly every day, in which he described the experiences of wartime and the lives of ordinary soldiers. He also kept a journal; an entry dated June 5, 1944, the eve of D-Day, describes the uncertainty felt by men who were fighting a war as the English tried to carry on their everyday activities:

“The invasion of France began after all the years of preparation and all the wrongs suffered at the hand of the evil one…How cold it must be in the sky now, and on the coasts of France…On a bomber base in England, with a farmer harrowing an adjacent field behind a plodding horse, I pass the D-day of this war.”

Plutzik continued his tour of duty in England for several months after the cessation of hostilities in the summer of 1945. He helped establish a library in Norwich and regularly gave informal lectures on American life and culture to local residents. Though his superiors encouraged him to re-enlist, Plutzik, like millions of other G.I.’s, was eager to resume his stateside life and career that had been interrupted by World War II. He rejoined his wife, Tanya, in New York. Soon afterwards, he was hired by the University of Rochester to teach in its English department.

Plutzik wrote two poems which were directly inspired by Shipdham – the first is ‘On the Airfield at Shipdham’ which concerns a skylark that he saw above the runway and which he connects to the bombers:

There is the lark, you said. And for the first time
I saw, far up in the fast darkening air,
The small lonely singer beating its wings
Against the pull of the old and evil earth.
It is too late, I said, to praise its song ….
Praise instead (because they bring our deaths
And thus another cycle of this bird’s praises)
The beasts with guts of metal groaning on the line
Or in the higher sky solemnly muttering.

© by the Estate of Hyam Plutzik. All rights reserved.

This poem was dedicated to R.H. Mottram, the Norwich-based novelist, best known for his Spanish Farm Trilogy (1927). Plutzik met Mottram after he invited him to give a lecture at the Shipdham air base. In fact, Plutzik records the event in a fascinating letter to his wife:

This evening Mr Mottram, well-known resident of the nearby city, came & lectured on our base, and I have just come back from taking him & his wife back to their home. Riding in the dark along the wet roads, with the forlorn landscape illuminated occasionally by the dimmed-out lights, I thought of you my wife, and I felt very lonely for you.

On the Sunday evening in question, Mottram and his wife were entertained in the officer’s mess and after the lecture were driven back to 4, Poplar Drive – just off the Newmarket Road in Norwich.

The second poem inspired by Shipdham is ‘Bomber Base’  which appeared in Plutzik’s 1949 collection  Aspects of Proteus. In this longer poem, the poet contemplates the bombers spread out on the airfield prior to take off but then shifts his attention to the surrounding East Anglian landscape where he notes the ‘thatched farmhouse sleeps in the dark’ or how the ‘bomb trucks move down the deserted perimeter/ Where the cold North wind stifles all.’

Norfolk also features in his famous poem The Airman Who Flew Over Shakespeare’ s England  where ‘pilgrims along the holy roads/To  Walsingham’ are mentioned. There is also a lesser known poem called The Old War which appeared in Apples of Shinar (1959) which was also set in the county. Plutzik’s long dramatic poem Horatio, although not set in the Norfolk, was drafted during his time here. The poem wasn’t published until 1961 – one year before Plutzik’s premature death from cancer. Plutzik was only 50 years old when he died.

Ted Hughes was a big fan of Plutzik’s work and said: ‘Plutzik’s poems have haunted me for twenty-five years. His visions are authentic and piercing, and the song in them is strange – dense and harrowing, with unforgettable tones.’