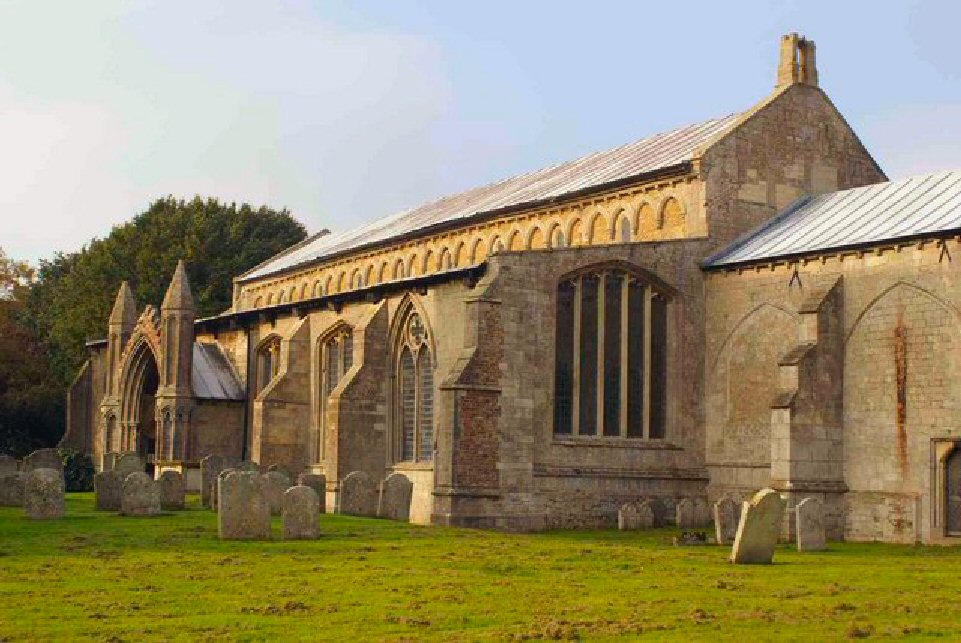 If you walk out from Wisbech northwards along the Walton Road there are some trees – on one side or the other – but the dominant impression of the flat land is as a sea of wheat. After about half an hour, the horizon ahead is broken by a church tower with pinnacled corners. Its silhouette in the distance looks like a long-eared owl. It’s still another three furlongs or so till you reach the church of St Mary, West Walton, but not until you’re round the bend by the village is it clear that there is something very odd about the tower. It is quite a way from the church, under which several springs are said to rise. The tower needed firmer footings.

This bell tower is a triumph of Early English architecture – tall lancet window openings, without decorative tracery. It dates from the mid 13th century. The fenland sky is visible through the arches on the four sides of the ground storey. The next two storeys are progressively taller – the first pierced by three lancets on each side, and the second by pairs below a super-arch. The parapet and the owl-ear pinnacles are two centuries later, but I don’t mind that.

Walking through the archway of the tower into the churchyard is not the end of a pleasant morning’s stroll. There’s impressive stuff to see inside. But first you can pause and see how odd the church looks with no hint of tower or spire. The nave is high and the chancel lower but long.

From a distance, between the nave windows and the pitched lead roof, a row of small round-headed windows is tucked beneath the eaves, punctuating blind arcading at a rate of one window every three arches.

The church looks not so much like a barn as like the airship hangar at Cardington in Bedfordshire, as it appears across the flat fields as the train goes by. Of course St Mary isn’t as vast as that, but the first glimpse inside the south door is pretty impressive.

Before turning the handle of that door, it is impossible not to be distracted by the Tudor stepped parapet of brick plonked on top of the Early English stone archway of the deep porch. Did the builders of this addition mean it to be rendered and so be less like a sore thumb?

Anyway, the impression of the church interior from the doorway is strong, but not simple. The feeling is of space. This is partly because no pews or chairs cover the wide stone-paved floor of the rear of the nave, and partly because the nave and the aisles each side are lit by daylight from the later perpendicular windows.

There is something else to notice about the wide arches between nave and aisles. They appear alive. Each column supporting an arch looks as if it had four scaffolding poles enclosing it. These are thin shafts of polished Purbeck marble, completely detached from the column and embraced halfway up by linked collars of stone. These detached shafts plunge upward into capitals of stiff-leaf carving. That is the technical name, but they look not at all stiff here, but like a sort of foam of vegetation caught in the act of bursting into the air. I’d wanted to see this church because of some splendid photographs by Matthew Byrne in his new book, English Parish Churches and Chapels.

The bell tower at St Mary, West Walton, is in the care of the Churches Conservation Trust. The church itself, like all those in the book, has benefited from a grant from the National Churches Trust. It needs more help to deal with subsidence. Otherwise, such marvels, in their hundreds, as English medieval churches, will not much longer stand.