Faced with an unfamiliar city, the temptation for many visitors is to head straight for the city centre. This is particularly true in Norwich and for those who arrive by train – the station forecourt seems to point you towards the bridge over the river which will lead to Prince of Wales Road the shops, castle, museum and much more. Those who resist this temptation and take the river path instead will find, just a stone’s throw away to the right, a real gem of the city’s history – Pull’s Ferry, sitting pretty on the River Wensum and one of the most famous landmarks in Norwich.

Pull’s Ferry is a 15th century medieval Watergate but it came centuries after a more ancient waterway was dug by monks. You see – both before and during the medieval period, transportation was a persistent problem, especially the transportation of heavy building materials. Roads were poor – if they existed at all, so bulk item were, of necessity, transported by boat. So it was in Norwich. Before any work could begin on building the proposed Priory and the 11th century Cathedral such a canal was needed to bring the materials direct on to the site. As well as stone, there was timber from the Baltic and iron from Sweden. But it was not only building materials that came via the canal; peat would also arrive, from what were to become the present-day Norfolk Broads, to be used as fuel in the Priory kitchens. However, it seems that over the centuries, the heavy stone used to build this holy place received most, if not all, of the publicity. Maybe this was because it’s journey was so long and arguably hazardous – for it came from France.

To be precise, this stone came from the quarries near Caen and would travel up and across the channel and onwards along the rivers Yare and Wensum to the Norwich building site that was to become both a Priory and Cathedral. This new Seat for a Bishop would serve as the central church for the Norwich Diocese, the work starting in 1096 and completed sometime between 1121 and 1145. During all this time, there was no port at Yarmouth and because sea-going ships were comparatively small they were able to make such a complete journey from France to Norwich. This must have certainly made the rivers Yare and Wensum places of great activity, because not only was materials being brought in for the Cathedral, but also for the Castle too.

The present short dyke which connects the river to Pulls Ferry itself is all that remains of the waterway which existed until 1772 when it was filled in and built upon. Before then, this same waterway flowed under the arch of the Watergate and deep into the Cathedral Close; having given its assistance to construction, it was the means by which river traffic was able to bring on-going goods and materials right up to the Cathedral and the accommodation thereabouts.

It was in the 15th century that the arched Watergate was built across this canal; it is this same structure that is the most obvious historical feature of Pulls Ferry today. The Watergate served to guard the approach to the Cathedral, and it was not until the Priory was dissolved by Henry VIII in the 16th century that the current Ferry House was built in 1647, thus incorporating the Watergate. The house itself was both an inn and the home for the ferryman who transported people across the Wensum. The first ferryman was named Thomas Howes, or Holmes but Ferry House was never named after him. Instead, it had been known as Sandlins or Sandling’s Ferry, a name that it would keep for at least 200 years, presumably after a 17th century predecessor. Certainly, at the time that Blomefield was writing his ‘Topographical History of Norfolk’ in the 18th century it was still called Sandling’s Ferry.

On the 13th July 1758, a short but severe thunderstorm wrought its fury on a house standing alone on the causeway near Sandling’s Ferry in the city of Norwich. Lightning struck off the roof tiles and pierced the house where it ‘tipt off the top of an old chair…… snapt the two heads of the bed posts, rent the curtains, drove against the wall…… forced out an upright of a window frame a yard long and sent it a right line into a nearby ditch’. This shaft of electricity peeled plaster off the walls and melted a row of pewter dishes. ‘An ancient woman’ sitting in a passageway was scorched all over, ‘her skin almost universally red and inflamed…… her shift burnt brown, stocking singed…… her shoe struck off’. The lightning missed:

……. another woman, sitting knee to knee with her companion as it shot along the passage. Those nearby heard a violent explosion and thought the whole house would collapse. It turned red, as if on fire, but it remained standing and the whole smelled as if fumigated with brimstone matches.

Then along came 28 year-old John Pull to become ferryman and publican for the next 45 years – between 1796 and 1841; probably the last licensee to do so. Apparently Pull got married the year after he took the post, to Ann Haywood who lived for only a few years, dying in 1800. The couple had a son, John, in 1798, who was baptised at St John Timberhill. John Pull married again in January 1802, to Ann Steers. A child was born to the couple in the June, which suggests that it was either very premature, or the marriage was one of necessity! But, there were tragic consequences – that child died only a week after being baptised. The Pulls, however, went on to have five more children but only three survived beyond childhood. Ann Pull ‘the second’ died in 1837 at the age of 52, and her husband, John Pull, followed in 1841, aged 73.

The pub closed sometime before 1900, and the building became derelict. As for the ferry, this operated until 1943, although with Bishops Bridge only a stone’s throw away one wonders why there was ever a need for a ferry. The answer may lay in the historical fact that Bishops Bridge had been a toll bridge into the Middle Ages and that Pulls Ferry was a cheaper way for foot passengers to cross the river. However, by the middle of the 20th century all other ways of crossing from Norwich were free. It should also not be forgotten, if one ever knew at all, that before the building of Riverside Walk, the way to the Bishops Bridge involved a lengthy walk through the Cathedral Close. But, it still seems difficult to imagine who would have used the ferry, unless they actually lived or worked in the Close – particularly since the ferry could not have been free. Maybe, and some possibly think this, the ferry was kept open by the request of the Cathedral Dean and Chapter?

Ultimately, both house and archway were saved by a bequest from Camilla Doyle and money raised by Norwich Girl Guides Association; that was in 1947. Over the next two years, restoration was undertaken by builders R. G. Carter and the architect Cecil Upcher. Today, Pulls Ferry and Ferry House remains privately owned; the only reminder of the history of the site is a small plaque at the top of the drive leading down to the ferry. Whilst there is a footpath along the river from the railway station Bishop Bridge which passes directly by Pulls Ferry, the best view of it is from the opposite side of the river, on Riverside Road. This view has been used in so many tourist brochures that Pulls Ferry has long been one of the ‘signature’ views of Norwich. It goes back over 900 years. 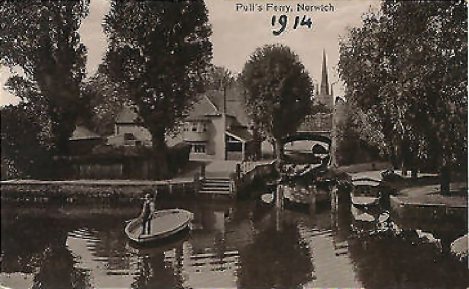 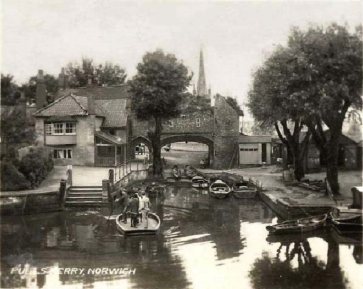 Now, it’s difficult to imagine that at the start of the 19th century the land opposite Pulls ferry was largely countryside but, like all things urban, much of this saw the start of building projects which grew apace during the next fifty years. Along came Riverside Road, the Norwich gas works, Rosary Cemetery and, inevitably, the Railway Station, turning this once tranquil area  into a suburb of the city centre with all its noise and activity. Between Riverside Road and the river bank opposite Pulls is now the Norwich Yacht Station, much used by Broads and river holiday visitors. Painters and photographers ever since have recorded a more industrial river bank, with boat building yards, a mustard factory and much else besides.