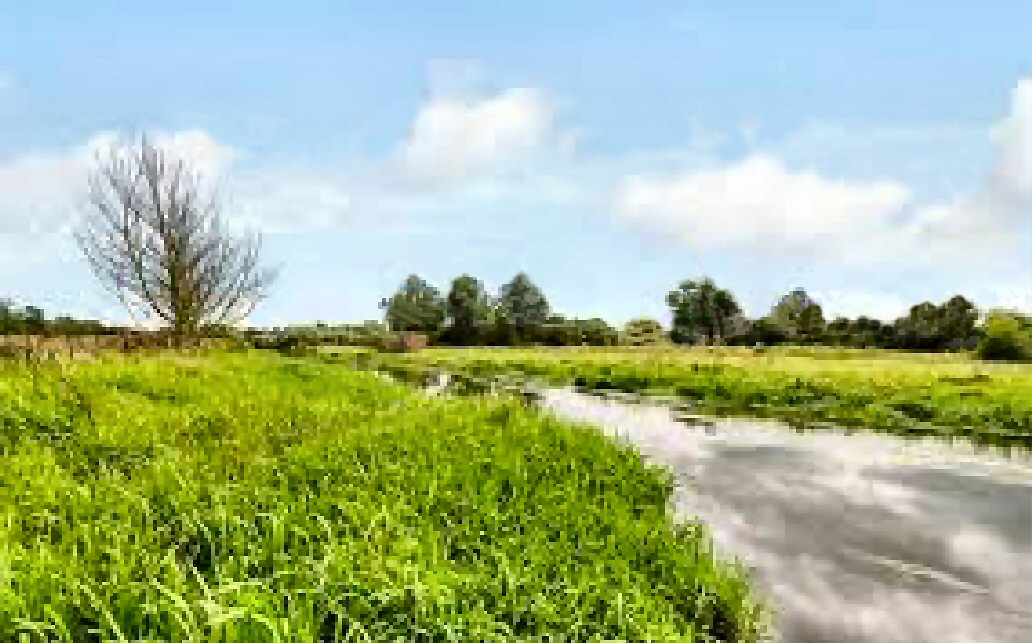 The thing about waterways is that they have bridges – nothing surprising about that because people and vehicles need to cross them and keep dry at the same time. Very occasionally, when these waterway are diverted, for whatever reason, a second bridge is necessary to span the new cut. What happens to the older structure? Well, depending on circumstances; if the old course is not needed then, presumably, it is filled in and put to other uses. If, of course, water still has a need to flow along that old course then the old bridge remains to do its job.

That was a case in point here, in Norfolk where the River Bure flows near Coltishall at Horstead with Stanninghall. As with other parts along the Bure’s lower reaches, the road crossings here tend to be both large and infrequent. For those travelling up stream, there are various examples of bridges built to connect Coltishall with Horstead and beyond, but the one that we are interested in is Mayton Bridge, or to put it more accurately, Mayton Bridges – plural, near to the now disused Coltishall RAF airbase.

The first and widely recognised Mayton Bridge is the flat topped construction with two cylindrical holes cut in the abutments to increase flood water capacity. This bridge was never part of the Aylsham Navigation although an earlier bridge must have stood on the site. This bridge occurs mid way along a long straight canalised section of the river, with the old watercourse winding off to the west as it approaches Buxton. Many in the past must have spent their summer days swimming or wading around this bridge for the depth of water under the span is rarely anything more than 18 inches, with the bridge itself originally built on a raft of huge oak logs.

No one seems to know whether the original bridge collapsed, maybe as a result of a past flood, or was torn down and rebuilt during World War II to allow heavy lorries to move between a local sand quarry on the west bank and the RAF base being built on the east – to become ‘RAF Coltishall’. We are told that the current bridge sits on top of a huge pile of rubble.

But the real interest of the ‘Mayton Bridges’ lies a couple of hundred yards to the west of the main, straight flowing, river where the road rises over a second bridge; this much older bridge comes complete with a couple of very unusual little shelters. This bridge has two arches spanning what some believe to be the original course of navigation. The bridge itself is very fine and in an excellent state of repair for its age although it was repaired in 1984. It is unusual in that it’s two arches are peaked in a manner not seen elsewhere on the river. Maybe this was how they were all built originally, or maybe this was a one off – it’s anyone’s guess! ‘British Listed Buildings‘ formerly describes the structure thus:

“Bridge over former course of river Bure, early C16, of red brick and plain tile. Double span, with 4 centred arches and cut water. Brick platband at road level. Parapets, splayed at either end of the bridge, those on the up- stream side containing shelters, with brick seats in recesses, formed with segmental arches of chamfered brick. Lean-to roofs over shelters, with brick kneelers, parapet verges and saddle back coping. Brick parapets rebuilt, on upper part, including stone copings. Scheduled Ancient Monument. County No. 207. Listing NGR: TG2499621561”

Very little seems to be available to describe Mayton Hall and I have not be able to find any photographs of it. For the moment, and until a kind and knowledgeable reader can provide something, I am left with the following brief outline: – Mayton Hall stands on the site of an earlier medieval moated manor and parts of the moat still remains. The earliest parts of the Hall date from the 15th century. This timber framed building was extended to the north in the late 16th century, further alterations were made in the 18th century, and a new façade was built in the 19th century. It was severely damaged by fire in 1984.

As for the old brick bridge, this dates back to around early to mid-16th century; it is a scheduled monument. It has two arches, although it has been suggested that it has four; only one of these now crosses the stream. On west side there is a large central cutwater with a sloping top. The water which used to flow beneath it is thought to have been an outflow from the moat at nearby Mayton Hall, once keeping the water fresh and preventing it from stagnating. The moat inflow was some distance upstream from the bridge. The suggestion that the bridge was built over the original course of the river is considered by some to be improbable. On each side of the bridge and facing the road are small shelters which may have been for the toll collector to sit.

To the more nostalgic amongst us, it is easy to imagine wherries being quanted (poled) up against the current and those in charge thankful for a second arch to relieve the water pressure against the bows – Dream on!.

2 thoughts on “Two Mayton Bridges – Not One!”