St Peter’s Church, North Burlingham, Norfolk has long been in ruin and what remains shows that it was mostly Perpendicular with the nave and chancel dating from the 15th century. There is a suggestion that, even further back in time, the church’s origins rest in Late Saxon times. The church was heavily restored in 1874 by the Burroughs family but its once proud round tower, with octagonal tope, collapsed in 1906 and the church was abandoned in 1936 in favour of St Andrew’s close by……… Many people over the years since then have visited the ruins of St Peter’s and, no doubt intrigued, have taken photographs and written interesting accounts; not least the following by Simon Knott who, in November 2007, paid his own personal visit:

“It was Historic Churches bike ride day 2007. We had been to Hemblington, explaining our plans for the day to the nice lady on welcoming duty, and to a gentleman cyclist who had just checked in. “Don’t forget that there is a ruined church at North Burlingham”, he said. We hadn’t forgotten, and already had plans to track it down, but we wondered if access to it was possible. “Certainly”, said the nice man. “I own it. It’s in my back garden. I give you Permission”

If only it was always that easy. Thanking him profusely, we headed on back down to the A47. North Burlingham is bypassed these days, but not by much, and the thunder of traffic was very noticeable after the peace of Witton and Hemblington. It is not a huge parish, but was obviously busy enough to maintain two churches well in the second half of the 19th century, when both underwent major restorations. St Andrew, a couple of hundred yards to the west, is a big, late medieval building with a huge tower, but St Peter was more typical of the area, a smaller, older church with a round tower. 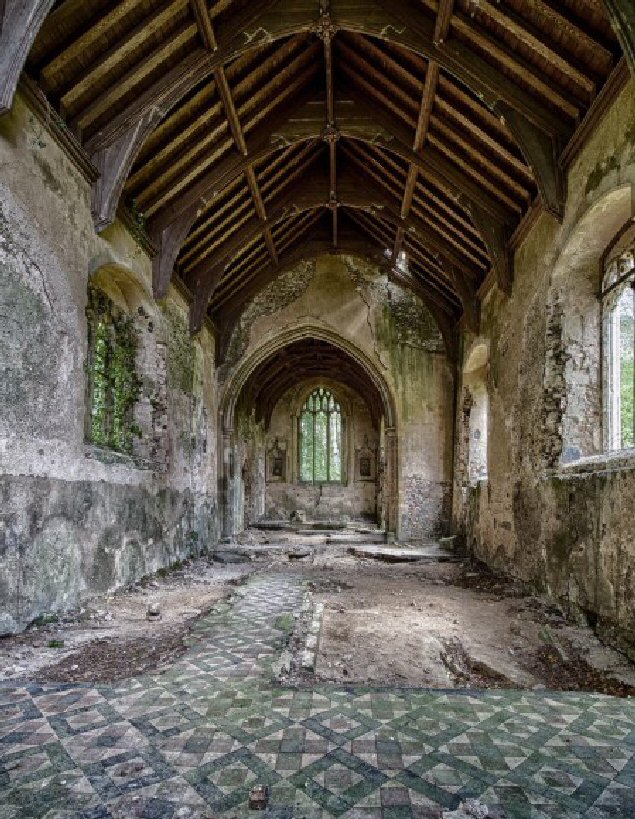 It was the tower that led to the demise of the building. One night in 1906, it collapsed into the nave. At first, the gap was merely boarded up, but, not surprisingly, this was found to be unsatisfactory, and in 1936 the remains of the congregation finally decamped up the road to St Andrew. The building has been left to decay since then, pretty much, quietly returning back to nature. Ashes to ashes, dust to dust. It is hard to see beyond its restoration, but this must have been a little Norman church, perhaps with a 13th century chancel. 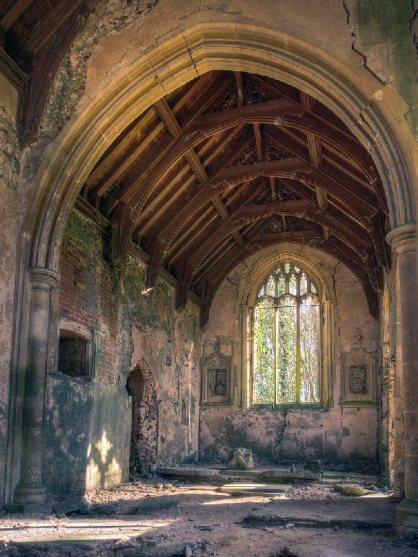 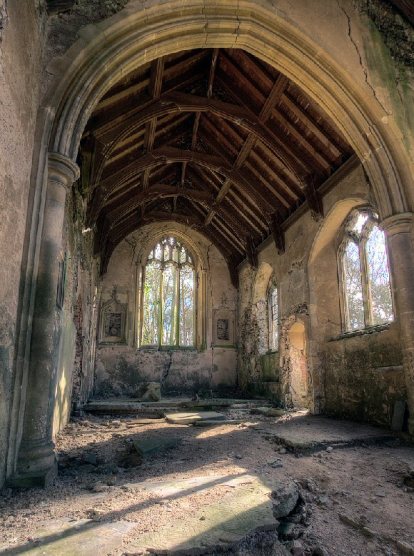 We stepped into what must have become a completely Victorianised building in the 1870s. Now, little remains. Victorian tiling forms an aisle up the middle to the off-centre chancel arch. The roof timbers are mostly still in place, although completely unsafe. There are broken ledger stones, and you can see into the vault beneath the chancel floor.

There was an elegant, quiet dignity about the building on this beautiful sunny day. The elder and ivy filtered the light as if they were stained glass windows, and although the building is now nothing but a faltering shell, it was quite possible to repopulate it in the mind’s eye with 19th century furnishings and people. There are quaint niches either side of the east window in a Decorated style, and I wondered if this was a suggestion that St Peter had been quite High Church in its 19th century heyday, perhaps as an alternative to Lower worship at St Andrew’s. 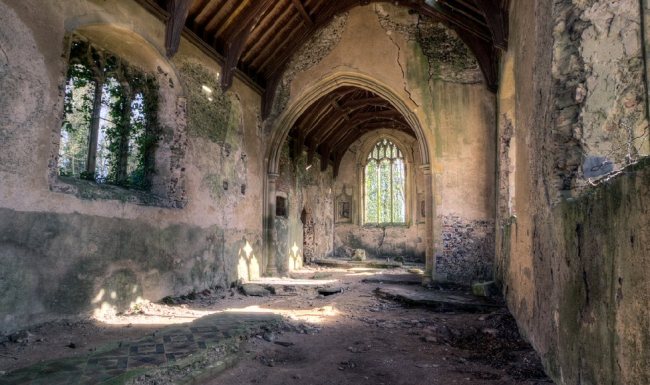 There was plenty of time for the furnishings and treasures to be removed, of course, and they have been mostly reinstated up the road at St Andrew. There you will find the pretty rood screen, now filling the mouth of the tower arch. Also there are the memorials, including two medieval brasses.

The medieval benches went across the A47 to Blofield, and other furnishings went to Earlham and Lingwood. The bells are in the keeping of the Norfolk Museum Service, along with so many extraordinary treasures in the great storage warehouse at Gressenhall.

Norfolk has many ruined churches. I have already visited fifty or so of them, and there are plenty more to come. But there was something particularly atmospheric about the interior and setting of this particular ruin. It would be impossible to find such a place sinister or eerie, for it is organic and harmonious. As if to accentuate this oneness with nature, a dead barn owl lay on the nave floor. It seemed not inappropriate. It was, as Tom observed, a good ruin.

We wandered through and around to the north side of the church. Here, hauntingly, there are surviving gravestones, dotted among the trees. The latest appeared to date from the 1920s or so, a cross for James William Oliver, who died aged 17 months. If he had lived, he would have been 85 this year. I wondered if anyone ever came here to remember him. There was something particularly poignant about these forgotten headstones, so close to the busy road but utterly unknown.

We came round the west end, to find the remains of the round tower virtually indistinguishable from the uneven flinty earth about them. Light shone through from the nave and out of the former tower arch, now a pergola for hanging ivy. As I watched, a blackbird alighted on the ledge, the light spangling his feathers. He opened his mouth and gave a throaty warble for a moment – then saw us…… and was gone. 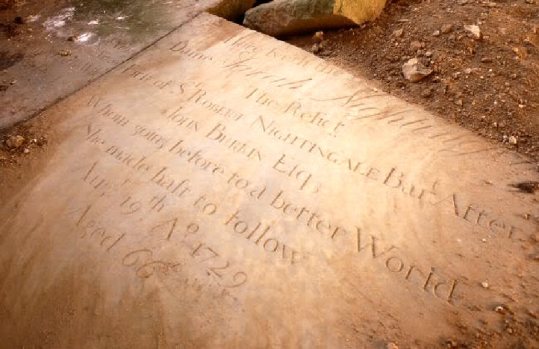 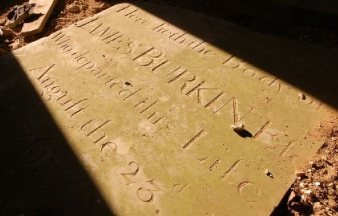 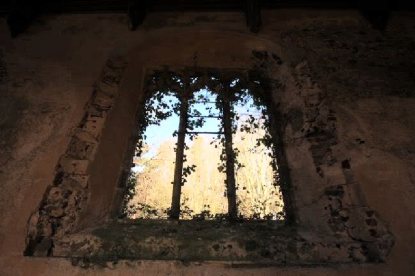 Many more have visited the site of St Peters Church since Simon Knott first wrote about it and many more will assuredly come, to admire, speculate, imagine what once was, to take their photographs and videos (see below) and report on social media.

“This place never really loses its mystique. As Larkin put it”:

A serious house on serious earth it is,
In whose blent air all our compulsions meet,
Are recognized, and robed as destinies.
And that much never can be obsolete,
Since someone will forever be surprising
A hunger in himself to be more serious,
And gravitating with it to this ground,
Which, he once heard, was proper to grow wise in,
If only that so many dead lie round”.

“I visited here today! I was searching high and low for it! A couple staying in a caravan on The Church Farm Site said they had seen it through a hedge so off I went in search of it! I met a man and asked how I could access it but he said it was in someone’s garden so he went and knocked on their door and asked if I could photograph it and they kindly said yes! I asked how they came to own the church Ruin and she said that someone was going to turn it into a private house so she wrote to the church commission and they said she could buy it for a nominal sum”!