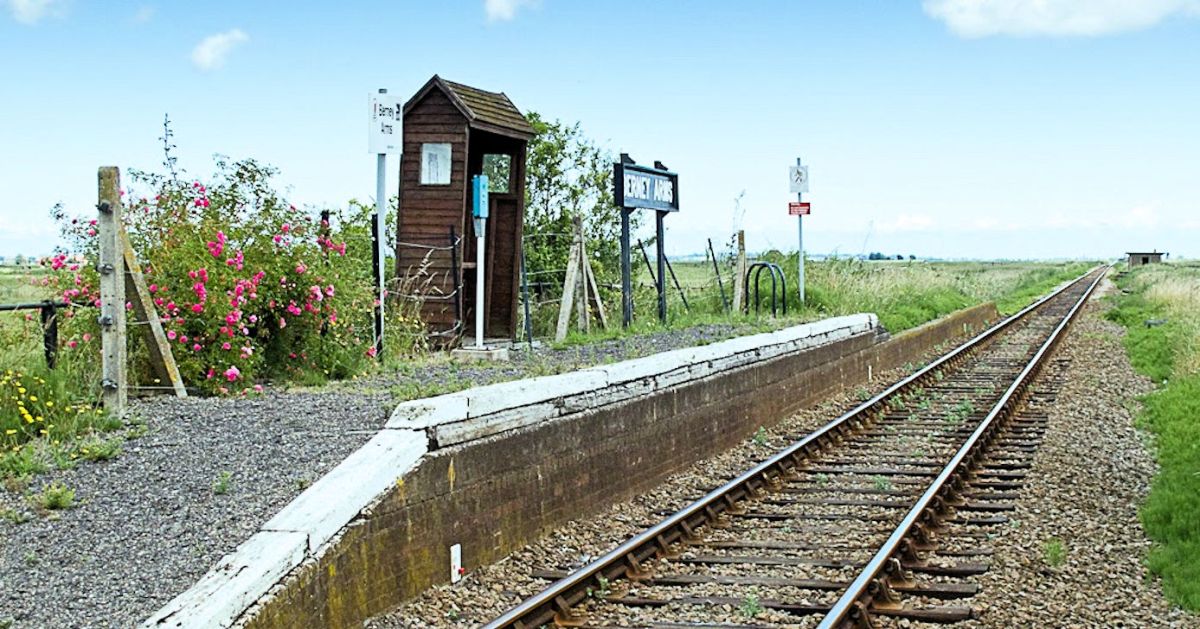 There is a railway station in Norfolk that is more than a little odd. Its history is odd; its size and shape is odd and where it is located is odd. So, what makes this particularly station odd, over and above the established ritual that passengers are expected to go through when they alight there – and when they leave! We are talking here about the Berney Arms Station on the often windswept Halvegate Marshes.

Why not start with the station’s platform, which is too short to accommodate the small two-coach train which stops on request on its way to and from Great Yarmouth (Vauxhall). Then there is the platform’s tiny wooden hut which, quite frankly should be labelled “Room for one person only”. Inside, there is a very informative map of the area which, with the aid of a pointer tells, you, “You are here”. Next to this very helpful statement someone once wrote: “In the middle of nowhere” – and that is just how you will feel if you ever get off at Berney Arms station. There is no road there, not even a track, but in a northerly direction you will see a path which is part of the Weaver’s Way which will take you, given time and stamina, to the north coast at Cromer. To the south there’s a grassy track which leads to the waterside.

Should you feel inclined to venture forth on the basis of the information so far imparted, be also prepared to attract a degree of attention from those on the train, a few of which would never dream of following when you alight. But, it’s a fair bet that, in the days when the pub was open, they would think that you were off to go to the ‘Berney Arms’! This former pub, by the way, was not beside the station but a good three quarters of a mile walk away! So, What was the point?

This is a very pertinent question, bearing in mind that there were, and still are, plenty of decent pubs close by in Yarmouth – in the opposite direction of course. But this sort of question was regularly asked, ever since the Berney Arms station was created in the mid 18th century. Then, and ever since up to the point the pub closed, the assumption had been that the station was built because the pub was there – simply not true! The Berney Arms station is there today because the original landowner, Thomas Trench Berney, would not sell to the railway company unless a station was put there “in perpetuity” – and, apparently, for no other reason.

So, a station was built, along with a row of cottages alongside, one of whose rooms served as the ticket office. But right from the very beginning of the station’s operation, very few people used it; so much so that within a decade from the station opening, the rail company announced that its trains would no longer stop there. Hey! – what about our agreement? protested Berney at the time; to which the railway company replied “Our promise was that the station would be there in perpetuity; we did not promise that our trains would stop there in perpetuity. There was, of course, much acrimony over this before it was finally ruled that one train in each direction should stop at that point on Mondays, Wednesdays and Saturdays. For this change, Berney was paid £250 as compensation.

From then and until the mid 1990s, the station seemed timeless, still retaining the old wooden name board from Great Eastern days, on top of which a lamp was mounted. Against the sign stood a short metal runged ladder allowing access to the lamp. The platform was lined with old sleepers which had seen better days and its surface was shingled and rough. From the beginning of the second millennium, the platform still looked the same but just about everything else went, replaced by the standard Anglia Railways metal name board.

The service of course runs daily, to and from Berney Arms station, with several trains a day and sometimes more on Sundays. The well established custom also continues, namely, that the train will stop at the Berney Arms Station but only if requested to do so. All the passenger has to do on the outward journey is warn the conductor in sufficient time. Returning home, however, requires a different procedure for the passenger, that of waving energetically to the driver of the oncoming train as soon as it comes into sight and approaches the station.

So, having stepped from the train on to the platform, what can you do to while away the three-hours at your disposal before you take the return train back to Norwich? There is, of course, little option other than to take a walk along the grass path that runs south of the railway – towards the waterside. It is the same path that takes you first to the Berney Arms windmill, which is sometimes open to the public. From there, you have two options; either walking eastwards, which follows the river towards Yarmouth or, walking in the opposite direction towards Halvegate. Either way, there will be boats chugging by and many water birds massed on the edge until you approach when, in domino fashion, they will dive into the river at the first sound of your feet. Butterflies seemingly will take no notice as they flit in and out the foliage and ground cover. Above there will ornithological specimens of various kinds coming and going. Beyond these meadows and the grazing cows you will not fail to notice the distant A47 highway traffic scudding along, symbolising the kind of world you probably had come here to get away from. As in almost a complete contrast, the walk west towards to Reedham is even better: little disturbance here, only passing boats and the occasional swoop of swans crash landing and then, ritually, adjusting their attire of wet feathers.

Then, there is the Berney Arms pub, once all brown, homely and cosy inside, ready to quench the thirst of a long walk – but in those days it was the case of watching the clock so as to time your return to the station. With whatever time you had left, you could enjoy the company of fellow walkers, and if you chose to sit outside you could watch the multifarious activities on the water. The boats ritually dislodging their holidaymakers and crews in search of a pie and a pint or two. Then, and as remains, there are those people, still regularly seen on a Broads holiday, who find it impossible to look anything other than habitual landlubbers but intent on establishing their credentials by shouting commands which incorporate such seafarer words as “ahoy”!

It was a safe bet that whilst drinking in the Berney Arms there would always be someone who would say “I always wanted to come here”. Equally, if that person was then asked if they knew of any other station in England as odd as the one three-quarter’s of a mile back up that grassy path, the answer would be somewhat vague at best. So, what’s the point of the Berney Arms station? Well, for those who come across it, either by accident or intent, it still deserves to survive ‘in perpetuity’, as a kind of therapy for stressed out urbanites who just wish to get away! But goodness knows what they would do if it rains.