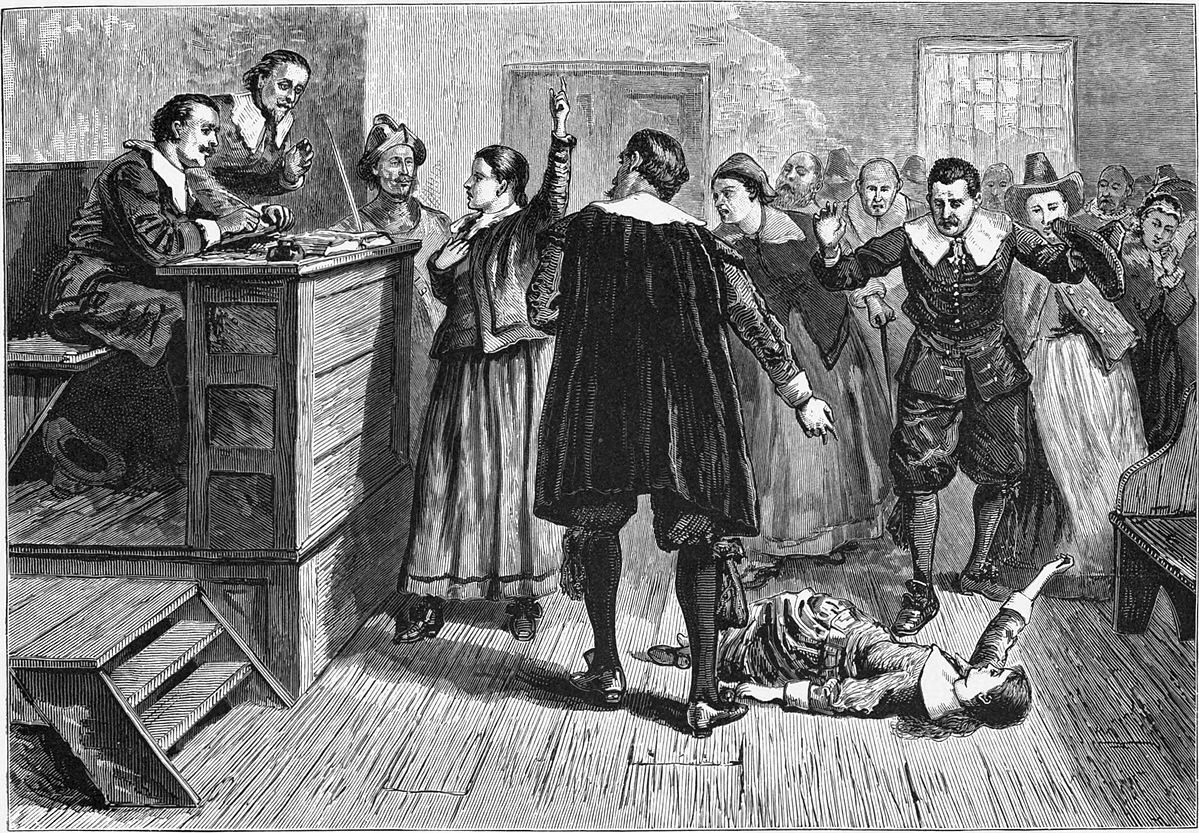 Rebecca Nurse was the oldest child of William and Joanna Blessing Towne from Great Yarmouth and one of three sisters who, in time, would be accused of witchcraft at the infamous Salem Witch Trials. Out of these three sisters Rebecca would be the second of them to be hanged.

Her father, William Towne was baptised on 18 Mar 1598/99 in St. Nicholas Parish Church, Great Yarmouth, Norfolk, England and his parents were said to be John TOWNE and Elizabeth CLARKE – although, others say that his parents were Richard TOWNE and Ann DENTON. Her mother, Joanna Blessing was born in 1594 in Great Yarmouth, Norfolk, England but there again, others have said that she was born in 1595 in Somerleyton, Suffolk, England to John BLYSSYNGE and Joan PREASTE .

Whatever the true antecedents of these two, William Towne married Joanna BLESSING on 25 Apr 1620 in St. Nicholas Church, Great Yarmouth England.  He and his wife remained at Yarmouth long enough to have six children before emigrating to America aboard the ‘Rose of Yarmouth’ with 32 other parishioners; this was sometime around 1640. Among Rebecca’s siblings were Mary Easty (or Eastey, to be arrested 21 April 1692 and hanged on 22 September 1692) and Sarah Cloyce (or Cloyse) to be arrested on 4 April 1692 but the case was dismissed January 1693). The Towne family finally settled in America around 1640 to live on a farm in Salem where two more children were born to William and Joanna Blessing.

Four years later, Rebecca met nineteen year old Francis Nurse who was a “tray maker” by trade but more than likely also made many other wooden household items. Due to the rarity of such household goods, artisans of that medium would have been highly regarded. Rebecca married Francis Nurse on 24 August 1644, after which they went on to live for the next 30 years in the more thickly settled part of Salem, “near Skerry’s” not far from where the bridge crosses to Beverley. During this time they had four sons and four daughters, all but one of them married by the fateful year of 1692. As for Rebecca, she had “acquired a reputation for exemplary piety that was virtually unchallenged in the community” and became a long standing member of the Salem church; but she was also known for occasionally losing her temper. In 1672, Francis served as Salem’s Constable and was regularly asked to act as unofficial judge to help settle disputes in the village.

Rebecca and the Salem Witch Trials

The public accusations of witchcraft in Salem Village began on February 29, 1692. The first accusations were levelled against three women who were not considered very respectable: the Indian slave Tituba, a homeless mother Sarah Good, and Sarah Osborne who had a somewhat scandalous history.Then on March 12, Martha Corey was accused, and on March 19, Rebecca Nurse found herself accused, despite both being church members and respected community members.

A warrant was issued on March 23 by John Hathorne and Jonathan Corwin for the arrest of Rebecca Nurse. In the warrant were complaints of attacks on Ann Putnam Sr., Ann Putnam Jr., Abigail Williams and others. Rebecca Nurse was arrested and examined the next day. She was accused by Mary Walcott, Mercy Lewis and Elizabeth Hubbard as well as by Ann Putnam Sr., who “cried out” during the proceedings to accuse Nurse of trying to get her to “tempt God and dye.” When she held her head to one side, those claiming afflictions moved their heads to the side as well “set in that posture.” Rebecca Nurse was then indicted for witchcraft. “I am innocent as the child unborn, but surely what sin hath God found out in me unrepentant of, that he should lay such an affliction on me in my old age,” she said.

That Sunday was Easter Sunday, which was no particular special Sunday in the Puritan calendar, but with Rebecca Nurse in prison, as were Tituba, Sarah Osborne, Sarah Good and Martha Corey, the Reverend Parris preached on witchcraft. He emphasised that the devil could not take the form of anyone innocent. During the sermon, Sarah Cloyce, Rebecca’s sister, left the meetinghouse and slammed the door.

The sequence of events thereafter was that on April 3, Rebecca’s younger sister, Sarah Cloyce, came to Rebecca’s defence…..but was then accused and arrested on April 8. Then on April 21, another of her sisters, Mary Easty, was arrested after defending Rebecca’s innocence. John Hathorne and Jonathan Corwin then ordered the Boston jail to take custody of Rebecca Nurse and others for acts of witchcraft committed on Ann Putnam Jr., Abigail Williams, Elizabeth Hubbard – and others.

A Mary Warren testified on June 1, that when she was in prison, George Burroughs, Rebecca Nurse, Elizabeth Proctor, and several others said they were going to a feast at the Parris house, and that when she refused to eat some bread and wine with them, they “dreadfully afflicted her” — and that Rebecca Nurse “appeared in the roome” during the taking of the deposition and afflicted Mary, Deliverance and Abigail Hobbs, and that Philip English appeared and injured Mary’s hand with a pin.

On June 2, at 10 in the morning, the Court of Oyer and Terminer convened in its first session. Rebecca Nurse, Bridget Bishop, Elizabeth Proctor, Alice Parker, Susannah Martin and Sarah Good were forced to undergo a physical examination of their bodies by a doctor with a number of women present. A “preternatural excrescence of flesh” was reported on the first three. Nine women signed the document attesting to the examination. A second exam that day at 4 in the afternoon stated that several of the physical abnormalities they saw in the morning had changed; they attested that on Rebecca Nurse, the “excrescence …… appears only as a dry skin without sense” at this second examination. Again, nine women’s marks are on the document. A grand jury indicted Rebecca Nurse for witchcraft on June 3.

Rebecca’s trial started on June 30 1692. Banned from having a lawyer, she represented herself and 39 villagers appeared on her behalf as character witnesses; her accusers broke into fits as they spoke about their claims and the so-called “spectral evidence” was deemed to be relevant. Regardless of this, Rebecca was found not guilty and there was an immediate outcry – the girls fell into prolonged fits and spasms, the public bayed for blood and the judges asked the jury to reconsider. Unsurprisingly perhaps, the verdict was changed and Nurse was sentenced to death on July 19 1692. However, another twist came into play; in light of urgent pleas from Rebecca’s family and abundant evidence of her good character, Sir William Phips, the Governor of Massachusetts granted Nurse a reprieve – then he withdrew it despite Rebecca filing a petition protesting the verdict, pointing out she was “something hard of hearing, and full of grief.”! On July 12, William Stoughton signed the death warrant for Rebecca Nurse, Sarah Good, Susannah Martin, Elizabeth How and Sarah Wilds and they were all hanged on July 19, followed by her sister who was tried and hanged on September 22 1692. Sarah Good cursed the presiding clergyman, Nicholas Noyes, from the gallows, saying “if you take away my life God will give you blood to drink.” – Years later, Noyes died unexpectedly, haemorrhaging from the mouth!

By October, with 20 people executed and 150 more men, women and children accused, the hysteria began to die down and the tide of public opinion turned against the trials. Sarah was released and later given nine gold sovereigns in compensation for her imprisonment and her sisters’ deaths.

Francis Nurse was to die on 22 November 1695, after the witch trials had been ended (in 1693) but before Rev. Parris finally left Salem Village and before the 1711 reversal of attainder bill that also gave some compensation to Rebecca Nurse’s heirs. In 1697, 12 members of the jury made a public apology, admitting they had been “sadly deluded and mistaken”. On August 25, 1706, Ann Putnam Jr., in formally joining the Salem Village church, publicly apologized “for the accusing of several persons of a grievous crime, whereby their lives were taken away from them, whom, now I have just grounds and good reason to believe they were innocent persons…” She named Rebecca Nurse specifically and publicly confessed her contrition for her part in the trials. Her excuse – That Satan made her do it! In 1712, Salem church reversed its excommunication of Rebecca Nurse and Giles Corey.

Rebecca Nurse is a central character in Arthur Miller’s The Crucible and in a Crucible Character Study of Rebecca Nurse Wade Bradford stated:

“If there is one character in “The Crucible” that everyone can love and sympathise with, it is Rebecca Nurse. She could be anyone’s grandmother, the woman you would never speak foul of or intend to hurt in any way. And yet, in Arthur Miller‘s tragic play, sweet Rebecca Nurse is one of the last victims of the Salem Witch Trials.

Nurse’s unfortunate end coincides with the curtain that closes this play, even though we never see it happen. The scene in which she and John Proctor head to the gallows is heartbreaking. It is the punctuation mark on Miller’s commentary on ‘witch hunts’ whether they be in 1690s Salem or the 1960s round up of alleged communists in America which prompted his writing this play.

Rebecca Nurse puts a face to the accusations and it is one that you cannot ignore. Can you imagine your grandmother being called out as a witch or a communist? If John Proctor is the tragic hero, Rebecca Nurse is the tragic victim of “The Crucible.” She is the saintly character of the play. Whereas John Proctor has many flaws, Rebecca seems angelic. She is a nurturing soul, as seen when she tries to comfort the sick and the fearful in Act One. She is a grandmother who exhibits compassion throughout the play.

When convicted of witchcraft, a humble Rebecca Nurse refuses to bear false witness against herself and others. She would rather hang than lie. She comforts John Proctor as they are both led to the gallows. “Let you fear nothing! Another judgment waits us all!”

Nurse also utters one of the more subtle and realistic lines of the play. As the prisoners are led to the gallows, Rebecca stumbles. This provides a dramatically tender moment when John Proctor catches her and helps her to her feet. She is a bit embarrassed and says, “I’ve had no breakfast.” This line is so unlike any of the turbulent speeches of the male characters, or the vehement replies of the younger female characters.

Rebecca Nurse has much she could complain about. Anyone else in her situation would be consumed with fear, sorrow, confusion, and rage against the evils of society. Yet, Rebecca Nurse merely blames her faltering on a lack of breakfast. Even at the brink of execution, she exhibits not a trace of bitterness, but only the sincerest humility. Of all the characters from “The Crucible,” Rebecca Nurse is the most benevolent. Her death increases the tragedy of the play.