Dating back to the late 15th century, the first Monday after Epiphany marks the start of ploughing for spring sown crops and was once the traditional day of agricultural workers returning after the Christmas period. Historic documents however, tell of plough candles being lit in churches during January in the 13th century.

Customs of the day varied nationwide, but the most common feature was a plough (blessed in church the previous day) to be hauled from house to house in rural communities. As the continued, an army of villagers collected money for the parish during a passing street procession. Apart from dancers and musicians, an old woman called “the Bessy” or a boy dressed as such and a man in the role of the ‘Plough Fool’ often headed of the procession. Some participants paraded a Straw Bear and not surprisingly, the event also attracted much drinking, merriment and mirth throughout the day. In Eastern England, ploughs were taken around by Plough Monday mummers and Molly Dancers and were sometimes even used as a threat. If householders refused to donate to the money collectors, their front paths would be ploughed up!

A festive Plough Pudding was also eaten on the day. Originating and also ‘invented’ in Norfolk, this was a suet pastry-topped boiled pudding filled with pork sausage meat, chopped bacon and onions with sage and sugar added. It could be eaten alone, or served with boiled potatoes, vegetables and gravy. One recipe suggested a Cooking time of 3 hrs 30 minutes, but today’s microwaves would reduce that!!  A similar item is still sold today by major supermarkets.

At its height, Plough Monday was most commonly celebrated in the East Midlands and East Anglia, until the English Reformation caused its slow decline. In 1538, Henry VIII forbade “plough lights” to be lit in churches, before Edward VI condemned the “conjuring of ploughs”. Ceremonies revived during the reign of Mary only to decline again during Elizabeth I’s reign. Some processions survived into the 19th century and in 1810, a farmer took his case to Derby Assizes, claiming that refusal to donate money, those pulling the plough, immediately ploughed up his drive, his lawn and a bench, causing twenty pounds worth of damage. Plough Monday customs continued to decline but were revived in some towns in the 20th, with remaining events mainly involving Molly Dancers. Some Plough Monday events were still recorded in the 1930’s before a “folk revival” in the ’60s and ’70s partly returned it to some communities. 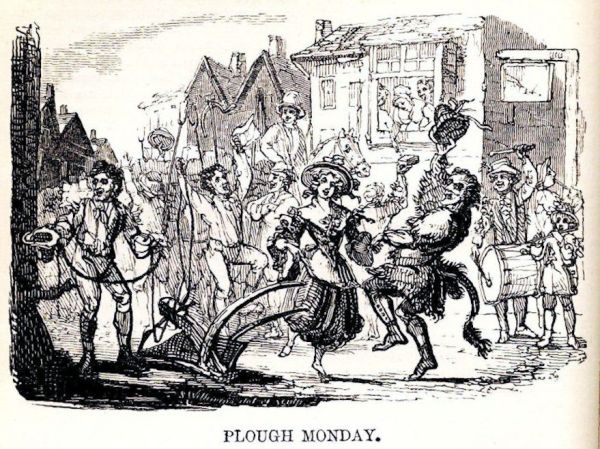 This year, being 2020, Plough Monday falls on the 13th January – which means, for this year at least, it does not clash with St. Distaff’s Day!!