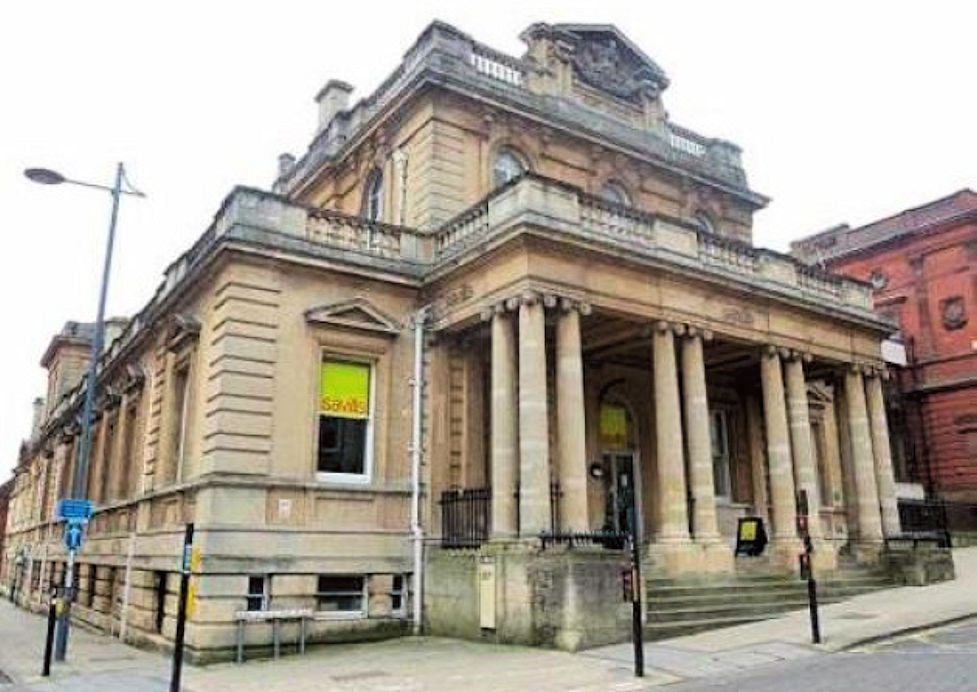 Hardwick House, built of Bath Stone, is a grand neo-classical stone structure which presides over Agricultural Hall Plain, at the top of Prince of Wales Road in Norwich. It is considered one of the city’s most architecturally elaborate building and was said to resemble a tiered wedding cake. Designed in 1865 by the London architect, Philip Charles Hardwick (in partnership with his father), it opened in January 1866 as a new premise for the Harvey and Hudson Bank and continued to be known as the Norwich Crown Bank, ever since it took on a failed Norwich bank around 1808. Philip Hardwick came from a family of successful architects, and his work included several City banks and buildings in London; he was frequently engaged countrywide on stately homes and in churches. He was best known for the Great Hall of London‘s Euston Railway Station of 1849. So, he was well qualified to create a solid structure essential for a Bank. It opened in January 1866, allowing the Harvey & Hudson‘s Bank, then trading from an 18th century building at 17 Upper King Street (now The Norfolk Club), to occupy the new building.

Built for Sir Robert Harvey at a cost of £13,000, Hardwick House is faced in ashlar with rustication at ground level and at the quoins. The portico is supported by paired Ionic columns, the plinths of which are set into a wide array of steps. The side plinths form part of the supporting portico structure, the north-eastern side being deeper because of the lower ground level. Those plinths project to form platforms, originally carrying lamplights and edged by the low, spiky railings that remain. Originally, railings starting at the west side of the portico, continued around the west side of the building into what became Crown Road, part of which still remains. The portico and upper terraces were also surmounted at each corner by decorative stone urns. Above the first storey is a terrace with balustrade sections, also repeated over the second storey. The three upper storey windows are round-headed in contrast with those at ground level. The exceptional stone cladding of the top façade is matched by the Crown, more ornate and imposing than the three crowns shown on the shield at the top of the Bank’s five-pound notes – those of St Edmund, standing for Suffolk, combined with Norwich’s coat of arms.

The stonework for the Crown, at the centre of the pediment, was created by Barnabas Barrett of Redwell Street, who had settled in Norwich in 1855. It was they who also produced the 12 apostles adorning the flying buttresses of Norwich Cathedral, and earlier in the decade, had carved the fine doorway for the second Corn Exchange in Exchange Street.

The Crown represents the crest of the Harvey family and rests upon a decorative swag. The pretensions of the crown chosen for his Bank by Sir Robert, are underlined by the flanking thistle and Tudor rose – the heraldic flowers of England’s union with Scotland. This pretensioness was further reflected by Sir Harvey when he chose the same architect, Philip Charles Hardwick to design the rebuilding of his country home, Crown Point at Trowse; built by H. E. Coe. at the same time as the construction of the Crown Bank in the centre of Norwich. Crown Point was acquired after Sir Robert’s suicide in 1870 by Jeremiah J. Colman and from 1955 became the Whitlingham Hospital.

Sir Robert John Harvey, 1st Baronet (1817- 1870) was a senior partner in the Harvey & Hudson Bank, which had originally been founded by his great grandfather in 1792 (Robert Harvey 1730-1816) and run by various members of the family over the following years.  At its height, the Bank had some 30 branches, 13 across Norfolk, 12 in Suffolk and 5 in Cambridgeshire, and there were probably more than 3000 depositors.  Sir Robert was in full control in the 1860s and enjoyed a good life style while he rebuilt his house at Crown Point in Trowse.  It was during this time that he speculated on the stock exchange, rather unsuccessfully as it turned out; he then hid his losses by noting them as debts from fictitious customers. Like other Norwich banks the Crown Bank succumbed to the banking crisis of the time, once it was discovered that Sir Robert had created a series of false accounts to underwrite his share speculation, which failed, leaving the bank with an estimated £1.6 million of debts against £1 million of assets. By 1870 Sir Robert was no longer able to hide the debt, particularly after a fall in the market due to the outbreak of the Franco-Prussian war.  Consequently, he shot himself at his home in Crown Point. It followed that swift action was then taken by the remaining Directors of the Bank who promptly filed a petition for bankruptcy to protect the Bank‘s assets. Negotiations then followed for the sale of the ‘Goodwill’, business and premises to Messrs Gurney & Co, which later became Barclays.

In 1875 the building became Norwich‘s General Post Office, with an extension to the south of the original building made in 1902. This required Her Majesty‘s Postmaster General to purchase from Youngs, Crawshay & Youngs, several dwellings and two public houses in Crown Road and King Street, during 1898. In 1901 an agreement was reached, enabling alteration work to proceed before the new Post Office opened. By 1969 however, its location amid increasing traffic, led to the GPO to move to another property in Bank Plain and Hardwick House was sold to a London-based property company in 1971.

It remained empty for a number of years before becoming part of Anglia Television‘s office and studio accommodation from 1980 to 2005. In 1982, the building was joined to the Agricultural Hall by a glass-fronted extension and following restoration, became Anglia Television‘s main entrance in whose foyer stood the famous silver Anglia Knight on its plinth, near to the reception desk. But ITV changes and mergers made this listed building redundant again and in 2003, Hardwick House was sold and partly converted into residential apartments. The remainder is for commercial use.

NOTICE: ‘Norfolk Tales, Myths & More!’ is a ‘non-commercial’ Site which publishes only informative and/or educational items in the hope of broadening an appreciation of the history and heritage of the wonderful County of Norfolk. In pursuing this aim, we endeavour, where necessary, to obtain permission to use another owner’s material, as well as our own. However, for various reasons, (i.e. identification of, and means of communicating with such owners), contact can sometimes be difficult or impossible to established. NTM&M never attempts to claim ownership of such material; ensuring, when ever possible, that any known and appropriate ‘credits’ and ‘links’ back to our sources are always given in our articles. No violation of any copyright or trademark material is intentional.

4 thoughts on “The Pretensions of a Banker!”