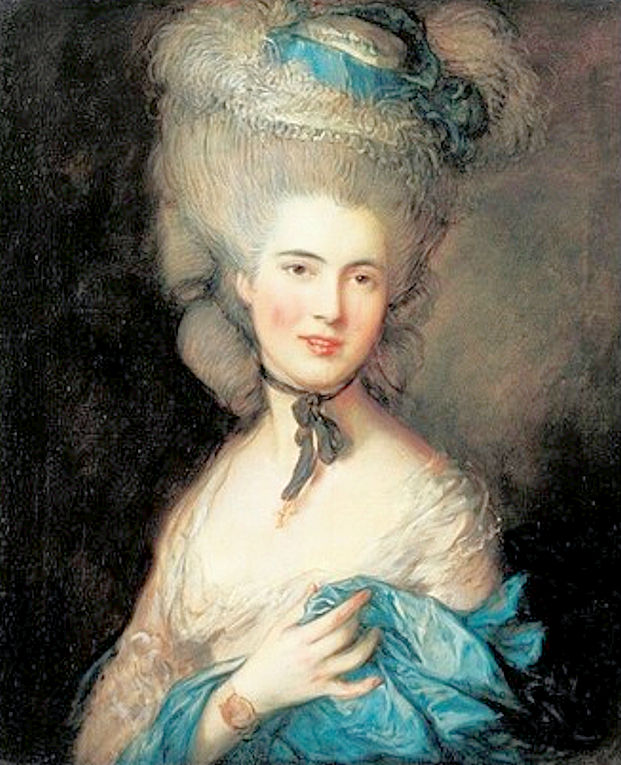 Norwich, 4th March 1736: It was on this day when the City ladies read with mounting excitement of “A Fresh and Neat Parcel of the Royal Beautifying Fluid” which had arrived in Norwich. Praise for its efficacy was not modest:

“So exceedingly valued by the Ladies of Quality and all who have used it for  its transcendent Excellency in beautifying the Face, Neck and Hands, to the most exquisite Perfection possible. It gives an inexpressible fine Air to the Features of the Face and a surprising Handsomeness to the Neck and Hands which it immediately makes excellent Smooth, Fine and delicately White” As if that is not enough:

“It takes away all disagreeable Redness, Spots, Pimples, Heats, Roughness, Morphews [blemish or birth mark], Worms in the Face, Sun-burnt, Freckles or any other Discolouring in the Skin”.

It needed only a few wipes with a little of the royal fluid, dropped on to a clean napkin, to make a lady’s face “fine, clear, soft and fair, as to cause Admiration in the Beholders”. The same retailer, William Chase, a Norwich bookseller, also stocked “the incomparable powder for the teeth, which has given such great satisfaction to most of the Nobility and Gentry in England for these Twenty Years”.

Bless them, the Georgians cared greatly about their appearance. Indeed, the lure of a pretty face in make-up became so strong in the Georgian period, and was considered so irresistible, that parliament, apparently, considered passing a law to protect men from being duped by painted ladies with designs on their purse:

“An Act to protect men from being beguiled into marriage by false adornments. All women, of whatever rank, age, profession or degree, whether virgins, maids or widows, that shall, from and after such Act, impose upon, seduce or betray into matrimony, any of His Majesty’s subjects, by the scents, paints, cosmetic washes, artificial teeth, false hair, Spanish wool, iron stays, hoops, high-heeled shoes and bolstered hips, shall incur the penalty of the law in force against witch-craft and like misdemeanours and that the marriage upon conviction shall stand null and void.”

Put forward in 1770 likely as a wry jab at fashion rather than a serious law, this amendment to the Witchcraft Act was never passed, nor did it make it into the debating chamber. Nevertheless, beauty treatments were abundant in Georgian Britain. Here are just seven which today may be considered as the most weird and wonderful…….!

White, White and White!
Our obsession with acquiring the perfect sun-kissed tan would have utterly perplexed the Georgians. In the 18th century a suntan was a sure sign that one worked outdoors, whereas the polite, wealthy classes remained indoors and out of the sun’s glare. The most basic and perhaps famous Georgian fashion was porcelain white skin, for both men and women.

Alongside horse manure and vinegar, the main ingredient in skin-whitening creams and powders was lead. Daubed liberally on the face and neck, these creams and powders helped to achieve that all-important ‘never been outdoors’ look. Whiteness was accentuated by using blue colouring to highlight veins, while lips and cheeks were tinted with yet more lead – this time coloured with carmine [a bright-red pigment obtained from the aluminium salt of carminic acid] or even with mixes containing highly toxic mercury.

With the widespread use of lead, it was hardly surprising that fashionable sorts began to suffer serious reactions to their make-up. From eye disorders to digestive problems and even, in extreme cases, death, the price of following the fashion for blanc was high. The prized porcelain skin tone so beloved of Georgian fashionistas wasn’t financially easy to achieve either. Deadly or not, skin creams were an expensive addition to a lady’s make-up bag and for those seeking beauty on a budget the options were limited: for both hair and face a light dusting of wheat flour might have to suffice.

Speaking of Patches…
Also known as mouches, beauty patches were small clippings of black velvet, silk or satin that were attached to the face to cover blemishes, including smallpox scars and damage wrought by white lead, or just as a bit of decoration. Often kept in highly decorative containers, these patches enjoyed many years of popularity.

Just as fans could be used to communicate a secret message, the position of these skin patches eventually came to be associated with coded meanings. For example, if one wished to show political allegiance, a patch on the right-hand-side of the face denoted a Tory while a Whig wore a patch on the left. On a more intimate note, a patch in the corner of the eye might be an invitation to a would-be paramour.

Unlike face creams, patches weren’t only the preserve of the rich. If you couldn’t afford finely shaped silk and velvet then a little bit of clipped mouse skin would do just as well. Patches even appeared in many pieces of Georgian art; perhaps most famously in William Hogarth’s A Harlot’s Progress:

Even Hugh Hair!
The popular image of the later 18th century is one in which enormous and flamboyant wigs teetered precariously atop the heads of fashionable ladies, but this isn’t actually accurate. There was plenty of teetering hair but it was often real, with wigs generally worn only by 18th-century men.

Ladies and gents alike achieved their fashionable pale hair colour by applying hair powder, which was made from flour or starch and puffed onto the head with a pair of bellows [a device constructed to furnish a strong blast of air]. For that typically Georgian ‘big haired’ look the wealthy employed an army of stylists who built elaborate structures atop their heads around wooden frames padded with extra sections often made from horse hair.

Curling tongs were also developed: these resembled a pair of blunt scissors, with two metal prongs and wooden handles. When the prongs were heated in the fire the hair could then be wrapped around them and held in place until the curl had set. Alternatively, clay rollers were heated in an oven and then applied to the hair or wig. Heads also would often be adorned with wax fruit and other decorations such as flowers or even model sailing ships, and the most elaborate hairstyles would remain in place for days or weeks at a time. Within these monumental headpieces our fashionable gentleman and ladies acquired the occasional lice, but the Georgians had an answer for that too: specially designed rods were sold that could be slid between the layers of hair and used to scratch the lice bites, while ensuring that their fashionable hairstyles stayed perfect. If the lice became really itchy there was always the possibility of treating them with mercury, but given that this was known to potentially cause madness or death, a scratching rod was usually the preferred option.

Mouse Eyebrows
With lead liberally applied to the face as a matter of routine, it is hardly surprising that people’s eyebrows often fell out. Georgian fashionistas therefore adopted a new approach and began to pluck out or shave what eyebrow hair remained before pencilling on a new brow or using lead or burnt cork to colour one in.

As black brows became a popular look, occasional mentions of a rather strange new fashion began to emerge: in 1718, celebrated poet Matthew Prior wrote a satirical poem about Helen and Jane, who wear eyebrows made of mouse skin. Evidence for mouse skin brows remains scant, but mention of them does appear in satire throughout the early 18th century.

It was a ‘Must’ to Pad the right places
Many 21st-century celebrity careers have been established upon (or at least bolstered by) the strength of a shapely bottom. Yet this is nothing new: fashionable Georgian men were no strangers to a bit of strategic padding.

Skin-tight breeches designed to show off the well-formed legs of their wearer became all the rage – but what if one didn’t have well-formed legs? For those who were too skinny to fill the garment, padding was the natural answer. Just like a modern padded Bra enhances the bosom, pads of fabric or horsehair could be inserted to breeches that would give the impression of muscled calves. 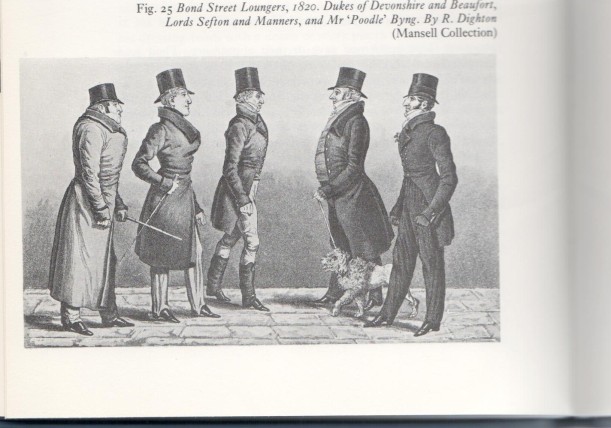 These pads could also be inserted anywhere else the male wearer might like a boost! These pads were the preserve of the most fashion-conscious of Georgian and Regency men. They found popularity among the highly fashionable, flamboyant chaps known as Dandies who wore corsetry and pads to create the perfect male shape.

What about that Gleaming Smile!
With the upper classes indulging in all manner of sugary treats, it’s hardly surprising that the teeth of our Georgian beauties were far from perfect. Tooth powders (also known as dentifrice) were therefore used to whiten teeth: among their ingredients of cuttlefish and bicarbonate of soda was often the mysteriously named spirit of vitriol. Better-known today as sulphuric acid, this mineral (which we now know to be highly corrosive) certainly whitened the teeth, but primarily because it stripped them of their enamel completely.

Unsurprisingly, many Georgians required dental surgery and, without anaesthetic, such procedures were a skin-crawling affair. Once the troublesome tooth was removed, the richest patients could opt for a replacement live tooth to be purchased from a donor and threaded directly into the socket. Some of these live teeth had actually come from the mouths of corpses, bringing with them whatever disease and infections their original owner had been subject to.

If a pricey live tooth was beyond your means and a gap simply wouldn’t do, there were alternatives on offer: anything from a single tooth to a complete set of dentures could be constructed from materials including porcelain, ivory, or even the teeth of soldiers who died at the battle of Waterloo. Known as ‘Waterloo teeth’, these were gathered from the mouths of dead soldiers and became highly sought after. After all, a client knew that a Waterloo tooth had come not from a man who died of disease or a corpse dug up by grave robbers, but a young and (hopefully) healthy soldier who died honourably on the battlefield.

Fard was a mix of sweet almond oil, spermaceti [a waxy substance found in the head of a sperm whale] and honey that was dissolved over heat and, once cooled, applied to the face and left on overnight. The recipe, was first published in The Mirror of the Graces,1811 followed by reprints which must have meant that the fashion continued decades later. 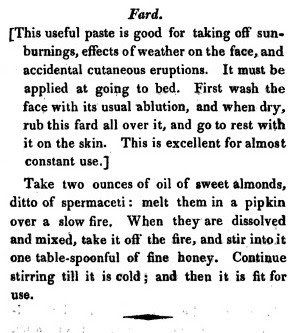 Sources:
https://www.historyextra.com/period/georgian/7-weird-and-wonderful-georgian-beauty-treatments/
This Blog is based on various sources but inspired by Catherine Curzon, author of “Life in the Georgian Court”, by Pen and Sword Books . Curzon also runs an 18th-century themed website named “A Covent Garden Gilflirt’s Guide to Life” acessed via:  http://www.madamegilflurt.com/