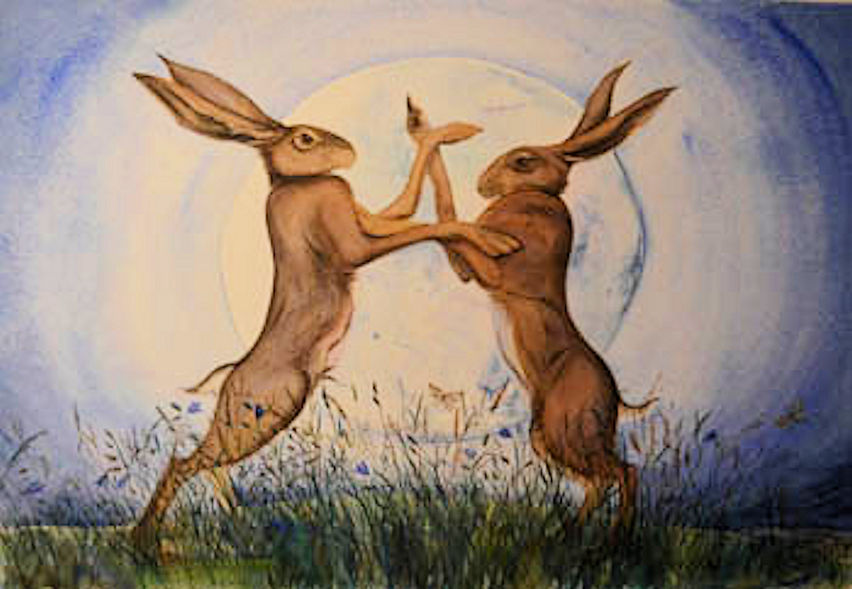 The Customs and Traditons of Spring

The ‘Spring’ or ‘Vernal Equinox’, which was once called ‘Ostara’, occurs on either 20th, 21st or 22nd March when the sun enters ‘Aries’ according to the Earth’s orbit and the insertion of leap years. The Spring Equinox marks the time when the sun crosses the celestial equator northwards or the ‘half way point’ resulting in equal twelve hours of day and twelve hours of night. At the equinox the sun rises exactly in the east and sets exactly in the west after which the daylight hours grow increasingly longer until the sun reaches its highest point in the sky at the ‘Summer Solstice’, which occurs in June.

The Oestra Hare in folklore and tradition

Have you ever wondered how the symbol of the rabbit became associated with the Easter Festival? The origin of the Easter Bunny probably goes back to the festival’s connection with the pagan goddess Eostre.

Eostre (sometimes spelt Oestre) was a fertility goddess from whom we derive the word “oestrogen” and she is closely associated with fertility symbols such as eggs. The rabbit is known as a highly fertile creature and hence an obvious choice for Easter symbolism.

In fact the use of the rabbit is probably a mistake – the Easter “bunny” is more likely to have been a hare, since it is the hare that is usually considered the sacred creature of Eostre.

Pagan fertility festivals at the time of the Spring equinox were common. It was believed that at this time, when day and night were of equal length, male and female energies were also in balance.

The hare is often associated with moon goddesses; the egg and the hare together represent the god and the goddess respectively.  The earliest known reference to our modern Easter Bunny tradition appears to be from 16th century Germany. In the 18th century, German settlers to America brought the tradition with them. The Bunny was known by them as Oschter Haws (a corruption of the German Osterhase ) and brought gifts of chocolate, sweets and Easter Eggs to good children. Often children would make up nests for Oschter Haws, sometimes using their Easter bonnets, and the Bunny would leave his treats there.

It is because of this strong connection with pagan traditions that Hares were strongly associated with witches and witchcraft in Christian times. People claimed that a witch could shape shift her form at night and become a hare. These solitary creatures, rarely seen, sometimes standing on their hind legs like a person, aroused suspicion. When in distress they uttered a strange, almost human-like cry, which gave the animal a supernatural quality. For its behaviour would mimic that of a supposed witch. In this form she stole milk or food, or destroyed crops. Others insisted that hares were only witches’ familiars.