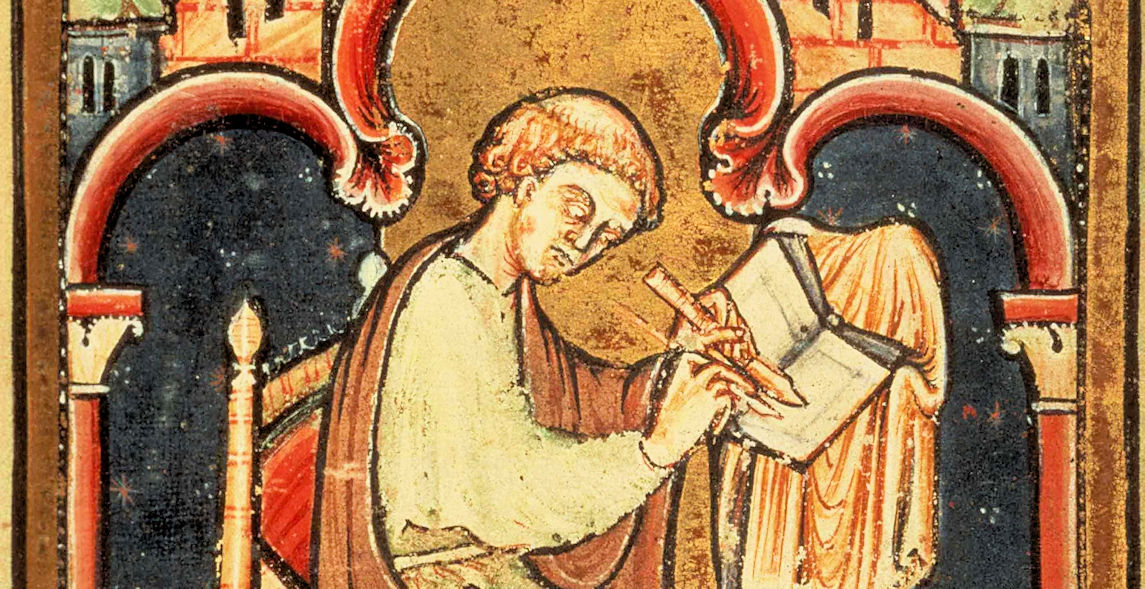 Living, as we are, in the post-Victorian period, our notion of Christmas has inevitably been informed by Charles Dickens and his peers, who solidified the modern version of Christmas as a time of generous gift-giving, charity, and copious food and drink. But, as the presence of ghosts in many of Dickens’s Christmas stories indicates, the modern idea of Christmas is also a time for reflection on the past. As an Anglo-Saxonist, I naturally think back to the early medieval period, and recently asked myself, how did they celebrate Christmas? Christmas is, after all, an Anglo-Saxon word – Cristesmæsse, a word first recorded in 1038 – and so would there be any resemblance to Christmas in 2016? The surprising results of my investigation are presented below.

The precise date of Christ’s birth was decided as 25th December by Pope Julius I in the fourth century, long before the Anglo-Saxon invasion of England. The original Germanic invaders – Angles, Saxons, and Jutes – were not Christian, but were still engaged in celebrations on the 25th December. According to Bede, writing in the eighth century:

‘They began the year with December 25, the day we now celebrate as Christmas; and the very night to which we attach special sanctity they designated by the heathen mothers’ night — a name bestowed, I suspect, on account of the ceremonies they performed while watching this night through. (De temporum ratione)’.

This was the festival known as Yule, still celebrated by Neo-Pagans across the world, and remembered indirectly by those indulging in a Yule Log this Christmas. Whilst details of the festival – like almost all aspects of Anglo-Saxon paganism – are murky, we can still pick out a few details from Bede’s account of the celebration.

The festival has some association with fertility and, as Bede implies with characteristic moral reticence, possibly involved ceremonial copulation. We can see here a link between Yule and Christmas: the pagans were celebrating birth, just as Jesus’s birth from Mary, a mortal woman, is celebrated by Christians on the same day. This common aspect to Yule and Christmas is important to observe: a mandate of the early Roman church, converting the pagans of Europe, was to pursue a policy of continuity, to ease the change from one religion to another amongst the recent converts. As such, deciding on 25th December as the date of Christ’s birth was a tactical ploy by the Roman Church.

The need for evolution rather than revolution in the conversion of pagans was specifically mentioned by Pope Gregory the Great in his instructions to the missionaries he sent to convert the Anglo-Saxons in 597. Speaking of the recycling of pagan religious sites, he explained: ‘we hope that the people, seeing that their temples are not destroyed, may abandon their error and, flocking more readily to their accustomed resorts, may come to know and adore the true God’. As well as in the implicit association of Yule and Christmas, we can see this process of adoption in the many ancient churches built on the sites of pagan shrines and incorporating the Yew tree, a sacred object to the pagans.

So, with the date of Christmas decided, and old festivals rebranded (though, of course, with less sex), what did the post-597 Anglo-Saxons do at Christmas? The first thing to note is that Christmas did not have the same importance in the church calendar as it does today. Far more important to the Anglo-Saxon Church was the festival of Easter, the celebration of Christ’s death and resurrection.

Christmas gradually grew in importance from the time of Charlemagne, the great Frankish king, who was crowned Holy Roman Emperor on Christmas Day 800 at St. Peter’s Basilica, Rome. Nevertheless, there were established Christmas traditions by this time, which were continued through the Anglo-Saxon period. The fullest account of Anglo-Saxon Christmas is given by Egbert of York (d. 766), a contemporary of Bede: ‘the English people have been accustomed to practise fasts, vigils, prayers, and the giving of alms both to monasteries and to the common people, for the full twelve days before Christmas’.

Whilst the requirement for fasting couldn’t be further from the more secular 21st century Christmas traditions of ceaseless gluttony, we can see the rudiments of later festive customs. Firstly, the more overt religious significance of the date – ‘vigils [and] prayers’ – is in part reflected in the modern day, when many people’s sole (begrudging) visit to church occurs on Christmas Eve or Christmas Day itself. Perhaps most interesting in this early iteration of the Christmas period is Egbert’s mention of alms-giving, in which we can see the predecessor of modern Christmas presents, a tradition probably started in imitation of the Three Wise Men bringing the infant Christ Gold, Frankincense, and Myrrh. Alms were charitable relief given to the poor, without expectation of payment. Although we are now more indiscriminate in our festive gift-giving, and rarely take socio-economics into the equation, this is the start of the tradition of Christmas presents. We can link, also, the traditional festive fundraising of organisations such as the Salvation Army to Egbert’s discussion of charitable acts at Christmas.

The final Saxon Christmas tradition we can reconstruct is the Christmas holiday. Alfred the Great was greatly influenced by the Frankish Court – his stepmother, Judith, was great-granddaughter of Charlemagne – and seems to have shared their view of the importance of Christmas as a festival. In one of Alfred’s laws, holiday was strictly to be taken by all but those engaged in the most important of occupations from Christmas Day to Twelfth Night. It has been suggested that Alfred’s rigorous observance of his own law left him vulnerable to his Viking adversaries, who defeated him in battle on 6th January, 878: the day after Twelfth Night. Based on what we have already discussed, we can assume this was not because of overindulgence in food and drink. Christmas Day and Boxing Day are still bank holidays today, and schoolchildren around the country enjoy a similar length of break at Christmas to Alfred’s Saxon subjects.

So, Christmas for the Anglo-Saxons was a mixed-bag. Although most were given almost a fortnight off work, they were expected to fast for the period, and only poorer members of society would be given any presents. Nevertheless, in a time when economic hardship was the norm, and most people had to work painfully long hours in the fields, the Christmas holiday would be a time for celebration, and it is no wonder people were in a charitable mood. It is easy to see how the traditions of charity, rest and gift-giving developed into the unrestrained indulgence of today. Gesælige Cristesmæsse!

One thought on “1. Christmas: Anglo-Saxon Style!”

Norfolk, United Kingdom
Please make use the appropriate buttons below to follow us on Facebook and to receive email notifications about new postings.
Join 369 other followers