Had World War Two not happened then we may never have heard of him. But it did happen and for a short while his name hit the headlines thanks to the investigative skills of the local newspapers. The local press built a story on the unselfish nature, courage and deeds of this lad and the award that he sunsequently received from a King.

The lad’s name was John Grix, was born in 1927 and living with his parents at 79 City Road, Norwich at the time of the conflict. As an aside, his grandfather was William Grix who once ran a restaurant in the city. John was one of five children and when of age attended St Mark’s Senior Boys School on Hall Road in Lakenham. This was a 19th century-built school, erected in 1897 at a cost of £3,000; its main benefactor and instigator at the time was the Vicar of St Marks, the Reverend Prior Whalley. The Reverend was said to have contributed £1,000 of his own money to the building fund and also provided the entire cost of the school furnishings, estimated to have been £130. He apparently died a poor man but helped establish a school where the ethos prepared many of its pupils who later went on to fight in the First World War of 1914-18; plaques dedicated to some of them in the local church bear witness. Amongst those heroes, and with his own memorial in the city centre, was a Sidney Day who won the Victorious Cross.

From St Mark’s, John Grix moved on to the Technical School, whilst also a chorister at St Peter Mancroft Church and a scout leader attached to that church. Additionally, he applied to join the Civil Defence Messenger Service (SDMS), operational because of the War. John’s application in this respect may well have come about because, during World War II, Boy Scouts in Britain were called upon to serve as volunteers in civil defence. It was believed at the time that Scouts, due to their training and qualifications, would be ideal, stressing that during an emergency, means of communications could be disrupted and that written messages might be the only means of communication.

It has been said that the boys in the Civil Defence Messenger Service never received the credit that they undoubtedly deserved, at a time when they risked their young lives, racing across the city and suburbs on their cycles, past burning buildings and falling masonry to deliver vital messages. These riders had to operate with two-wheeled machines which often had to function with flat tyres, caused by strewn glass and debris; as bombs rained down, such riders were regularly thrown off. Those on the front line, such as the firemen and police officers who fought to put the fires and control the civil population, often relied and acted upon the vital information which was delivered to them by the members of the messenger service.

Then there was the feeling that no-one would ever know the exact number of lives the CDMS helped save during the Baedeker raids of April 1942, but it was established that more than 200 men, women and children died over two nights in that April and that many more lost their homes. As the movement grew, women also played their part, motor-cycles arrived and its headquarters were relocated at Chapel Field East. In total, there was said to be around 200 boys and 30 girls who were members of the Civil Defence Messenger Service in Norwich. It was an organisation where officialdom had decreed that the lads so employed must be aged between 16 and 18; but, for the quiet and modest John Grix, clearly keen to join and ‘do his bit’, he quickly invented another birthday which placed him in the 16-year-old bracket – he was readily accepted!

Pamela Brooks wrote in her book ‘Heroes, Villains and Victims of Norwich’ about John Grix:

“His actions in Norwich during the Blitz were incredibly brave, particularly as he had fibbed about his age so that he could become a member of the Civil Defence; he was only 15 at the time. As a member, as the air-raid sirens sounded and people took cover, Grix rode off on his bicycle to the report centre to await orders. He took messages to the firemen, even though the incendiary bombs were falling around him. On one occasion he was passing a factory when acid was sprayed from the windows and burned his hands; he didn’t tell anyone he was hurt and continued taking messages instead. And, he didn’t stop when the air raid was over; he helped rescuers among the ruins. He slept overnight at the report centre and was out again on the second night of the raid – he kept taking messages, even though he was blown off his bike five times.”

Whether one should believe that it was the local newspaper which told John Grix that he was in line to receive an award, or whether it was by way of a formal letter telling him that he was going to received the British Empire Medal (BEM), is not important. What was important was the fact that by being told by the Regional Commissioner, Will Spens, that he, John Grix, had acted ‘with courage and determination’ the way was being cleared for King George VI, during his surprise visit to Norwich in October 1942 when he referred to the feeling that ‘all these messengers should be remembered and applauded’. In particular, he spoke to John Grix and added his own congratulations, plus the comment “I understand you are only 15”. The wool had not been pulled over the eyes of the authorities! 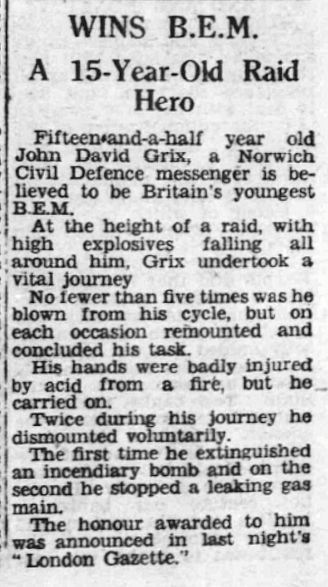 John Grix could not serve his country in the armed services for several reasons, they included his true age, the injuries he received while serving in the CDMS, plus the unfortunate circumstances of losing one of his lungs. Instead, he went on to work at Laurence Scott & Electromotors for most of his remaining life, interrupted only by a period when he and his brother ran the Lings hardware shop in White Lion Street of the city. He married, and with his wife had two sons, Stephen and Ian. John Grix died in 1990 at the age of just 63 years.