The Felthorpe Village Sign tells three stories, two of which are more prominent
than the third.

Story 1:
In the forefront of the Felthorpe Village sign is the image of two women in a chaise pulled by a black horse, with St Margaret’s Church in the background. It is believed that one of the women depicted is Mary Wright Sewell (6 April 1797 – 10 June 1884), who was an English poet and children’s author. Though popular for writing juvenile bestsellers in her day, she is better known today as the mother of Anna Sewell, the author of Black Beauty – the other woman depicted is, understandably, Anna Sewell herself. Mary lived at Church Farm, Felthorpe from the age of 2 to 12 years old, between 1799 and 1811.

Mary Wright (Sewell) was actually born on 6 April 1797 in Sutton, Suffolk. Her father, John Wright, and mother Ann Holmes, were farmers and had seven children, of which Mary was the third. Her upbringing followed Quaker principles. Originally taught by governesses at home, she attended boarding school in Tottenham around 1811, when her father sold his farm to invest in a ship. He was unsuccessful in this enterprise and by the time Mary had turned eighteen she was forced to become a governess herself at an Essex school.

Some eight years later Mary married Isaac Sewell whose parents were also Quaker elders; the marriage took place at Lamas in Norfolk on 15 June 1819. Mary and Isaac settled in Yarmouth where, the following year, their daughter, Anna, was born, followed by a son, Philip, in 1822. Her husband Isaac had a number of ill-advised businesses and he declared himself bankrupt after his son was born. Isaac would go on to become a travelling salesman, while Mary herself would teach her children at home. Alongside this, she wrote her first book, ‘Walks with Mamma’, using words of only one syllable; the income from this helped to pay for books to educate her children.

Between the years 1858 and 1864, the Mary’s family lived at the Blue Lodge, Wick, Bristol where she continued her great love of poetry. While at Wick, Mary wrote ‘Mother’s Last Words’, which sold just over a million copies throughout the world; the book tells a story of how two boys are saved from sin by their mother’s last words. Then during the 1870s, Mary nursed her daughter, Anna, through her terminal illness of hepatitis, or tuberculosis. During this period, she transcribed the dictation of her daughters only novel, ‘Black Beauty’. In 1878, both her daughter and her husband died; Mary herself died on 10 June 1884.

At the top of the Felthorpe Village Sign is an image of a Victoria Cross. This represents one awarded to Claude Thomas Bourchier who was born 22 April 1831 in Brayford, Devon. His father was Lieutenant James Claud Bourchier, who served in the Peninsular Wars in the 11th and 22nd Regiments of Light Dragoons, and his mother was Maria, 2nd daughter of George Caswall from Sacomb Park, Hertfordshire.

Claud followed his father into the Army when he obtained his first commission at the age of 18 in  The Rifle Brigade (Prince Consort’s Own). He served with the Rifle Brigade in the Caffre War of 1852-53 and also in the Crimean Campaign of 1854, including the Battles of Alma, Balaklava and Inkerman, being Aide de Camp to General Torrens at Inkerman, and at the Siege of Sebastopol. It was at Sebastopol on the 20th November 1854 that Claud Bourchier would perform the acts of gallantry which would result in the award of the Victoria Cross.

On that day, Lord Raglan had devised a plan to drive the Russians from some rifle pits in front of the left flank along some rising ground at Sebastopol. The duty of driving the Russians out was given to the 1st Battalion, and a party consisting of Lieutenant Henry Tryon in command, with Lieutenants Bourchier and William James Montgomery Cunninghame, four sergeants and 200 rank and file, was detailed to carry out the plan. They marched down to the trenches where they lay down until darkness fell. They then advanced stealthily and advanced on the enemy, catching them by surprise. They quickly drove the Russians from their cover, though supported by a heavy column of Russian infantry. Soon, the Rifle Brigade came under heavy fire, and in the moment of taking the pits, Tryon was killed. Bourchier took over command and maintained the advantage, and they captured the pits. They also held the pits throughout the night despite repeated counter attacks. They did this until they were relieved by another battalion the following day. They lost 10 men including Lieutenant Tryon and had 17 wounded.

For his gallantry, Bourchier was given the brevet of Major. He also received the Crimean Medal with four clasps, made a Knight of Legion of Honour, received the 5th Order of the Medjidie, the Turkish Medal and was awarded the Victoria Cross, which was announced in the London Gazette on 24th February 1857. Bourchier was present at the first investiture on 26th June 1857 at Hyde Park, London and was personally presented with his medal by Queen Victoria. Soon, he was posted to the Indian Mutiny and served in the Campaign of 1857-59, including the Siege and Capture of Lucknow, Battle of Nawab-gunge, attack and capture of Fort Oomerea, for which he received the Indian Mutiny Medal and clasp. He also served on the Afghan Frontier, near Peshawar, during the disturbances among the native tribes in the winter of 1863.

Colonel Bourchier was then appointed Aide de Camp to Queen Victoria in April, 1869, having retired the same year on full pay. Bourchier retired soon afterwards with the rank of Colonel and enjoyed his later life as a member of Boodle’s club in St James’s, London. He had settled at his final home at 38, Brunswick Road, Hove on the south coast. He died, aged just 46, on Monday, 19th November 1877 at his home and was buried in St Andrew’s Churchyard in Buxton, Norfolk. His Victoria Cross is now displayed at the Royal Green Jackets (Rifles) Museum, Winchester, England. 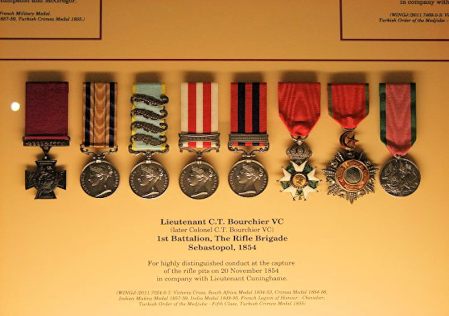 Story 3:
Almost as a footnote, the third story behind the Felthorpe Village Sign is represented by an image of a mammoth. This is a reference to the discovery of a number of mammoth teeth in the late 1950s at Sparham Common gravel pit. This site is now Sparham Pools, a nature reserve managed by Norfolk Wildlife Trust.