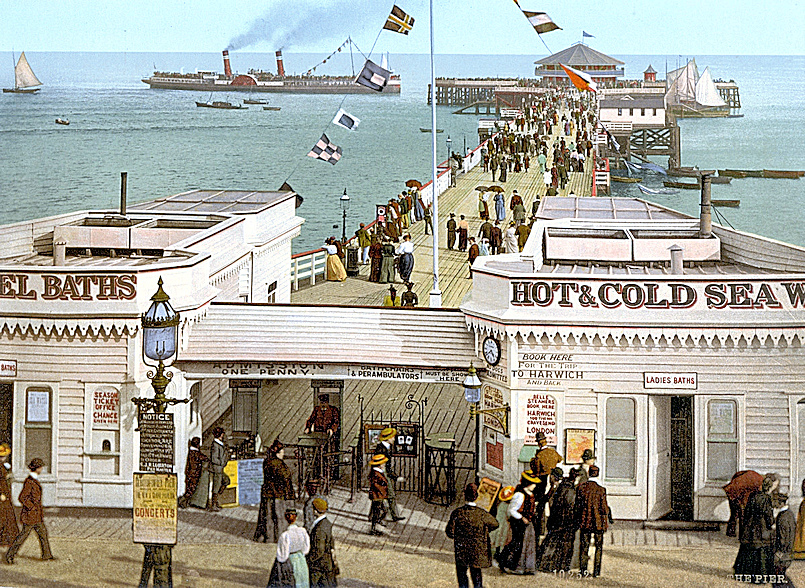 The pleasure steamers our grandparents and great grandparents enjoyed are long gone. All we have are the memories of the tales they once told; along with the sepia and poorly coloured postcards that, having been posted from resort to family and friends during those far-off years, now lie cocooned in collectors’ albums, boxes and draws.

It is also certain that the likes of Great Yarmouth, along with every other seaside resort along the east coast and elsewhere, will ever again see these floating super-charged paddle-driven charabancs moor up and unload and re-load holidaymakers and trippers from London and other stopping places en route. Nice now to recall the era when they were commonplace, operating as they once did between our eastern resorts and often using specially-built piers where there was neither river nor adequate harbour.

The heyday of pleasure steamers coincided with that of the punctual railways, but the two clearly complemented each other for, like today, many folks enjoyed the spice of adventure for their holidays and chose pleasure steamers to provide this. An example was when, on August Bank Holiday Monday in 1889, thirteen special trains arrived at Yarmouth’s South Town Station packed with visitors – and five paddle steamers sailed into the Yare, each full to capacity. As usual, Hall Quay was crowded with sightseers welcoming the steamers, crews and passengers. Also waiting would have been those boarding-house proprietors offering accommodation in the town. But even then, it was more than likely that, in the thronged resort, some distressed and homeless visitors still desperately sought rooms in the early hours of the following morning.

That great pleasure steamer period began in the 1820s and endured until the Great War of 1914-18, unquestionably making a massive contribution to Yarmouth’s holiday industry. Some ships sailed directly from the Thames in London to Yarmouth, while others made “bus stop” calls at other resorts en route. Then, on the River Yare, some tied up on Brush Quay at Gorleston to let passengers off before continuing up-river to Yarmouth – an indication of the importance of Gorleston as a holiday destination. Occasionally, adverse weather conditions did cause delays in boat arrival, resulting in day-trippers having only a few hours ashore before they had to re-board for the voyage home. 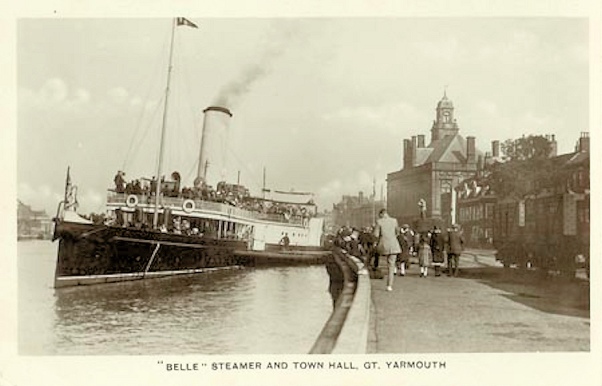 The pleasure steamer line that provided this service to and from Great Yarmouth was the Belle Steamer fleet, which was a comparative late-comer to the business. ‘Belle Steamers’, as they were referred to, was nothing more that the marketing name used by the steamer company which had been created by various interests connected with the development of the east coast resorts of Clacton, Walton, Southwold, Felixstowe, Lowestoft and Great Yarmouth. Belle Steamers was the actual name of the parent company for about one year only, in 1897. The principal number of vessels operated by this company north of London totalled six; they were: 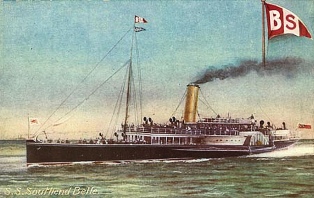 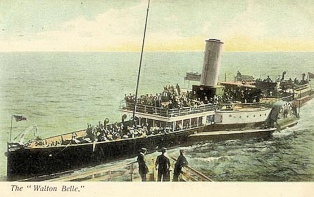 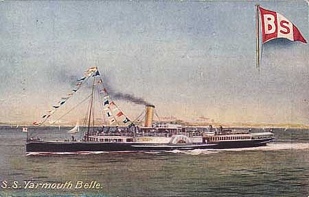 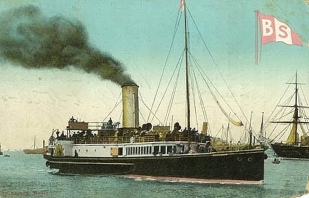 It was in June 1897 when the PS Walton Belle arrived in Yarmouth, after her maiden voyage from London; flags fluttering as cheering onlookers welcomed her and her 150 passengers. Her arrival was the inauguration of the London to Yarmouth (and vice versa) Belle Steamer service in the town, although the previous year the PS Southend Belle had sailed into the port and proved that safe berthing was possible, despite the Yare’s notorious currents. It also convinced the line that, provided the right vessel was used on the Thames-Yarmouth voyage, profits were assured. The PS Walton was, in fact, the sixth company vessel – and the fifth ‘Belle’. She was finished to the highest specifications, ensuring that her passengers were safe and well provided for. Her hull was divided into nine separate watertight compartments, a specification which rendered it very unlikely that the vessel would founder in any extreme weather conditions. As for her accommodation, first-class saloons were provided in oak and sycamore finishing, and the chairs and settees were upholstered in velvet and arranged to give a home-like appearance; windows guaranteed fine sea views and were curtained in blue and gold tapestry. The vessel was fully lit by electricity.

Soon after the PS Walton Belle’s inaugural visit to Yarmouth the great and the good from the area were invited on board for a voyage to savour the quality of the services the vessel had to offer. It was just as she was passing Corton, when Abel Penfold, the company chairman at the time, addressed the dignitaries. It was a well-timed intervention, being that his guests had been mare than adequately fed on a sumptuous lunch. No one questioned his statement that there was good mutually-beneficial business to be gained from a regular service between the capital and Yarmouth. Neither did they appear to doubt that the Belle steamers were far superior to the company’s rivals, but then it must have been a distinct possibility that few, in any, of the softened-up guests would ever make such a comparison.

Nevertheless, Abel Penfold seemed determined to make the point that his company would not be beaten on service and standards – and he kept his promise; within three years the Belle fleet numbered at least six vessels covering the east coast up to Yarmouth. Within seven years it had the monopoly on not only the Yarmouth service but also the landing piers of Lowestoft, Southwold, Clacton and Felixstowe. They used to say that on bank holiday weekends it was not unusual to see three Belle steamers berthed in the Yare. All would have arrived crowded with trippers eager to enjoy the pleasures of Great Yarmouth. This continued throughout the Victorian and Edwardian period when the Belles served the town; the Belles being principally the PS Walton Belle, PS Yarmouth Belle and PS Southwold Belle, proving that they all were indeed strong and reliable, a credit to their designers and builders. But what about Belle Steamers Ltd itself? (1896-1897)

The company was formed in 1896 when the London, Woolwich and Clacton-on-Sea Steamboat Company was renamed – using the title which applied to its steamers. However, the company was wound up at the end of 1897 and a new company named The Coast Development Company was formed, with interests outside the vessels themselves, particularly with further speculative development of the coastal resorts of East Anglia, but still retaining the ‘Belle Steamers’ identity. The company had pier and land interests in Clacton and also Walton-on-the-Naze. Importantly, a newly extended pier at Walton, then owned by the Belle Steamers parent company, became an important steamer call and from 1900 – 1904. The steamers would call at the more northerly pier before the more treacherous and tide-bound Clacton pier; this gave Walton “first call” for London excursionists and a new role as the interchange point for onward passengers to the more northerly resorts such as Yarmouth. The company also purchased land at Southwold in 1898 and set about the development of the small resort there, with new roads, a large hotel, a pier and a new steamer, to be called PS Southwold Belle, which entered service in the mid-summer of 1900. A pier was also built at Lowestoft (Claremont Pier) and opened in 1903 and a further pier at Felixstowe in 1905.

Then came the outbreak of war in 1914 and this meant that the whole steamer service was terminated. The vessels were requisitioned and put into service as minesweepers. Two of them went to Russia as hospital tenders. With peace came a decline, almost inevitable in the light of competition from motor coaches and changing ideas about excursions by sea. The steamers were gradually disposed of and the last call to Southwold was made in 1928. In 1934 a severe storm washed away the pier’s ‘hammer-head’ there and any chance of steamers being able to call was lost.

An almost ‘last throw of the dice’ by Belle Steamers was when three of its pleasure steamers, ‘Queen of the Channel’, ‘Golden Eagle’ and ‘Royal Eagle’ were used to evacuate thousands of schoolchildren from Yarmouth and Lowestoft when the 1939-45 war broke out.  However, this exodus was briefly counterbalanced by the arrival in Yarmouth of 4300 London mothers and children ferried to Yarmouth by the same three pleasure steamers