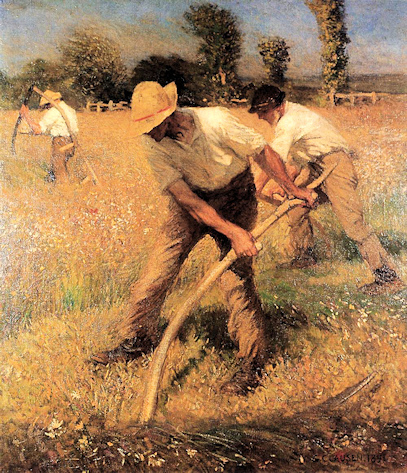 Joseph Arch was not born and bred in Norfolk, but he did play a key role in unionising agricultural workers of the County and championing their welfare, along with becoming the Liberal MP for the North West of the County in 1885.

Joseph Arch, in fact, came from the Warwickshire village of Barford where he was born on 10 November 1826. His ancestors were also Barford bred and for three generations, at least, had owned and lived in their own cottage there since the 18th century. After only three years of schooling, he started work as a labourer at the age of nine and his first job was as a bird-scarer, working 12 hours a day for a wage of 4d per day – so, he knew from bitter experience, the problems that faced the poorly-paid, ill-educated rural labourer of the time. From being a bird-scarer, he progressed to become a plough-boy, then a skilled hedge cutter before mastering just about any other farming skill one could find on the land. Such qualifications enabled him, in time at least, to move around the Midlands and South Wales, earning quite a reasonable wage in the process. At the same time, he could not fail to observe the terrible conditions in which the majority of his agricultural labouring colleagues lived. These were later described by the Countess of Warwick in the introduction she wrote to his eventual 1898 autobiography:

“Bread was dear, and wages down to starvation point; the labourers were uneducated, under-fed, underpaid; their cottages were often unfit for human habitation, the sleeping and sanitary arrangements were appalling …… In many a country village the condition of the labourer and his family was but little removed from that of the cattle they tended.”

Following his return home to his Warwickshire village from his travels, Joseph Arch married in 1847 and, over time, had seven children. He also became a Primitive Methodist preacher which, apparently, did not go down well with the village parson and his wife who discriminated against the Arch’s’ as a result – there again, Joseph’s family had always been at odds with the parson. Nevertheless, during this period, Joseph also managed to educate himself politically by reading old newspapers and, in time, became a supporter of Liberalism.

It was therefore to him, as a well-respected and experienced agricultural worker, that his destitute fellow workers turned for help in their fight for a living wage. Called to address an initial meeting held on 7 February 1872, in the Stag’s Head public house in Wellesbourne, Joseph expected an attendance of fewer than thirty. Instead, he found on his arrival that over 2,000 agricultural labourers from all the surrounding area had arrived to hear him speak. The meeting was therefore held under a large chestnut tree opposite on a dark, wet, winter night, with the labourers holding flickering lanterns on bean poles to illuminate the proceedings.

The right man in the right place at the right time:
From this initial gathering, further meetings were called and from one of these a committee was elected which met at John Lewis’s old farmhouse in Wellesbourne. Its endeavours eventually resulted in farm workers, from all parts of South Warwickshire, meeting in Leamington on Good Friday, 29 March 1872, to form the Warwickshire Agricultural Labourers Union. From this, and in light of much agitation up and down the country, the National Agricultural Labourers’ Union was established, and Joseph Arch was elected as its President. The Union’s first action was to withdraw their labour, and farmers and landowners soon found out that the reprisals they tried to apply were ineffective; the result was, for a time, a temporary rise in the workers’ wages. This seemed to satisfy the Union members to the point where they ceased to organise themselves further. Inevitably, farm owners fought back and came to ‘locking-out’ union members, an action which became so widespread that the Union finally collapsed in 1896. It would, however, be replaced a decade later by the National Union of Agricultural and Allied Workers in 1906.

But this was the time when Joseph Arch became identified with what was clearly a very popular cause.  He travelled all over England, speaking in stirring language at countless village meetings; inspired no doubt by his deep faith in his cause. Rural workers everywhere welcomed him as one of their own and from the walls of many small cottages’, portraits of his strong bearded face looked encouragingly down. He also became the subject of such rallying songs as:

Joe Arch he raised his voice,
’twas for the working men,
Then let us all rejoice and say,
We’ll all be union men.

In 1873 the Canadian government invited him over to examined the suitability of the country for British emigration. Impressed by his report, his Union helped over 40,000 farm labourers and their families to emigrate both there and to Australia over the next few years.

Joseph Arch also turned to agitating for the widening of the voting franchise, which until then only included property owners, and this resulted in the passing of the 1884 Parliamentary Reform Act. In the ensuing 1885 General Election, he was elected as the Liberal MP for North West Norfolk, the first agricultural labourer to enter the House of Commons. He did lose his seat when William Gladstone was defeated in June 1886; however, Arch was re-elected to the same constituency in Norfolk in 1892, when he was one of twelve working-class MPs in parliament. Though he was appointed as a member of the Royal Commission on the Aged Poor in 1893, he seldom spoke and his former supporters came to perceive him as pompous and out of touch. Now they sang about him

Joseph Arch he stole a march,
Upon a spotted cow.
He scampered off to Parliament,
But where is Joseph now?

“Mr. Joseph Arch, M.P., at a meeting held at New Buckenham, delivered to the agricultural labourers his famous address which was quoted throughout the country for some time afterwards.  “You poor, craven milk-and-water fools,” said the hon. member for North-west Norfolk, “why, you button up your pockets at the thought of paying 2¼d. a week when you are told by a lot of lying scampery and scandalism that I have run away with your money. . . .  Professor Rogers once said when speaking of the tenant farmers, that their heads were as soft as the mangolds they grew.  I think some of the labourers’ heads are as soft as the mangolds they hoe.”

In 1898, Arch published what was considered to be ‘a pugnacious and opinionated autobiography’, upon which The Spectator newspaper commented at the start of its long review that:

“One cannot help wishing that this book was more of an autobiography, and less of a polemic against Mr. Arch’s adversaries, political and social.”

Retiring from Parliament before the 1900 General Election, Arch returned to spend the last years of his long life in his tiny cottage in Barford; the place where he had been born. He died there on 12 February 1919 at the age of 92 years.

(1) The Wellesbourne Tree: This tree died in 1948 but the spot was marked by a commemorative stone at the old meeting place, now renamed Chestnut Square. In 1952, the National Union of Agricultural Workers erected a bus shelter there and set up inside it a commemorative plaque which still remains. A replacement tree was also planted where every year union representatives once gathered on 7 February and then went on to Barford to lay a wreath upon Arch’s grave. The unions do not, apparently, do this anymore, but the Wellesbourne Action Group organises a walk from Barford to Wellesbourne in June each year, along the footpath known as the Joseph Arch Way. There is now also a Joseph Arch Road in the village which runs off the A439 roundabout, while in Barford the old coaching inn has been renamed the Joseph Arch pub. 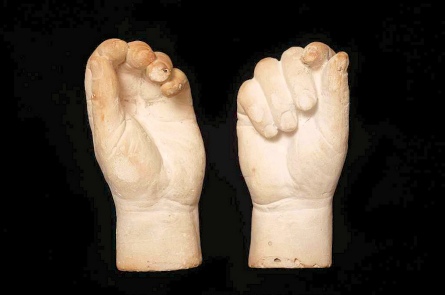 The Museum of English Rural Life has a Joseph archive; included in which are curious plaster casts of his hands and wrists. Unfortunately, nothing is known about these plaster casts, except that they were made during the last quarter of the 19th century when Joseph Arch was no longer a practising agricultural labourer – else, they would be heavy, calloused and weather-beaten. Also, the exact reason why the casts were made is unknown. Maybe they were part of a statue; even though no other parts of the statue have been found. Another possibility is that such plaster casts were created because, during the 19th century, they were used to improve art and for teaching and research purposes. However, there seems to be no written record which could explain exactly why these casts were created – only speculation remains.

NOTICE: ‘Norfolk Tales, Myths & More!’ is a ‘non-commercial’ Site seeking only to be informative and educational on topics broadly related to the history and heritage of the County of Norfolk in the U.K.

In pursuing this aim, we endeavour, where possible, to obtain permission to use other people’s material. However, for various reasons, (i.e. identification of, and means of communicating with that person or owner), contact can sometimes be difficult if not impossible to established. NTM&M never attempts to claim or suggest ownership of such material; ensuring at all times that any known and appropriate ‘credits’ and ‘links’ back to our sources are always given in our articles. If there is any violation of copyright or trademark material, it is unintentional.

If you are the originator/copyright holder of any photo or content contained in this blog and would prefer it be excluded or amended, please contact us via our ‘Contact Us’ page to flag it for correction.

If this blog contains any inappropriate information please contact us via our ‘Contact Us’ page to flag it for review.