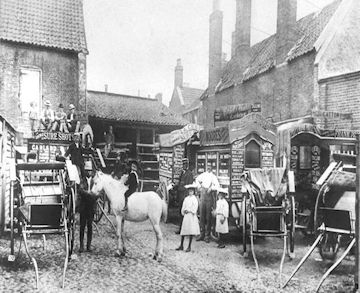 The Norwich firm of James Newbegin & Son, tobacco and cigar manufacturers, was well established in the city when the owner’s son, George James Newbegin, was born in 1845 – and a certain Daniel Adcock joined the company two years later. These two men were destined to work together before George, the son of the owner, retired and Daniel, who previously had looked after the manufacturing side of the business, secured joint ownership of the business, renaming it Adcock & Denham. The two men were quite different in character and best treated separately for the purposes of biography.

George Newbegin was educated in the Priory School, or Norwich Grammar School. he grew up to be a quiet and somewhat reserved in manner; someone who indulged in walking and solving chess problems. He also had inherited a love for all things scientific from his father, which was satisfied when he was to specialise in astronomy. On the way to indulging in the more serious aspects of life and work, he also had sporting instincts which were to lead him into yachting.

Immediately after schooling, George became apprenticed to a firm of booksellers and stationers in Tunbridge Wells. From there he later returned to Norwich to assist his father, James, in his tobacco business, and to which he succeeded in 1871 at the age of 26 years. His love of things scientific and particularly astronomy led him, in 1875 to erect his first 5-inch equatorial telescope in the quadrangle of his factory in Norwich. The difficulties he had in doing this was because the factory quadrangle was not only 35 feet square but was surrounded by walls that were 30 feet high, and admitted only a very limited horizon. Not to be put off, however, he built his telescope on a high pillar and so overcame, to some extent, the difficulties of the situation. At the same time, it appears not to have been documented just how easy, or difficult, it was for him to look through the lens – but apparently, he did – and was happy!

We know nothing more about George, particularly his handling of his tobacco business, only that by 1882, eleven years after taking over the business from his father, he found himself in a position where he was able to retire. This opportunity seems to have arisen when he agreed to sell his business to Daniel Adcock, employee, and his partner, a Mr S Denham – see below. As for George, he moved to a private dwelling named the Town House on the Yarmouth Road in Thorpe St Andrew – today, its address is 18-22 Yarmouth Road and is the Town House Hotel. There he re-erected his telescope in more spacious surroundings at the rear of the house, a somewhat grand house that overlooked the Old Reach of the River Yare; there the railway and “New Cut” had created Thorpe Island with Jenner’s basin visible on the opposite bank. 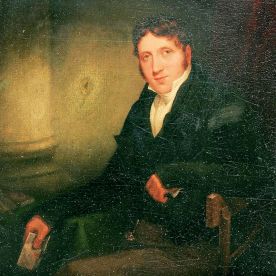 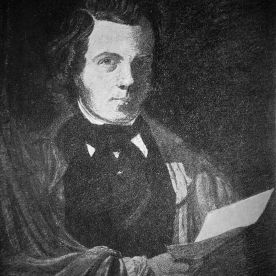 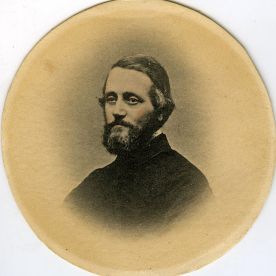 Although not part of this story, it may be of interest to some readers that for many years during the turn of the 18th century and into the early years of the 19th, George’s house was the home of Edmund Cotman, a silk merchant. More importantly, however, is that Edmund was the father of John Sell Cotman, the famous artist who, amongst many other paintings, produce “View from my Father’s House”, probably from the very spot where George had his telescope many years later. That painting is now housed in the Norwich Castle Museum.

The Town House was subsequently inhabited by John Sell’s (left images above) two sons –  Miles Edmunds (centre image above) and John Joseph (right image above). Our subject, George Newbegin was to follow.

In 1888, the same year when George Newbegin was elected a Fellow of the Royal Astronomical Society, he added considerably to his equipment at Thorpe and went on, over the next 16 years to study the sun and contribute to the knowledge of luminary by spectroscopic observations, and also by photography of sunspots. For many years his observatories at Thorpe were opened to the public every Easter Monday, and many people owed their first acquaintance with the heavens to George’s public spirit. On one occasion 241 persons came to his door.

But it was in the autumn of 1904 when George Newbegin left Norwich for Sutton in Surrey; there he re-erected his then 9-inch telescope and mounted the photographic lens alongside, and for the remaining years of his life spent his entire time observing and publishing his results annually in the Royal Astronomical Society’s Journal. He died on 4 April 1919.

As for Daniel Adcock, his life took quite a different path before arriving at James Newbegin & Son in Norwich in 1847. He was born in 1805 and when barely two years old his parents sailed for a new life in America. However, their journey was interrupted somewhat when the family, and others, were taken prisoner by Spaniards and taken to Spain. They did, however, eventually arrived in New York, where his father became involved with the manufacture of cigars – and here lies the clue to what followed as far as Daniel was concerned. The family were to return to settle in London before Daniel, at least, ventured back to Norwich in 1847. It was at this point when he became employed by James Newbegin & Son, tobacco and cigar manufacturers; he responsible for looking after the manufacturing side of the business; a business that was spread about the city in such locations as Queen Street, Bridewell Alley and the Market Place.

At some point thereafter, Daniel Adcock teamed up with a Mr S. Denham and, in 1882 it seems, took over the Newbegin business, changing its name to Adcock & Denham – the moment when George Newbegin had decided to retire. When that happened, there was a clear opportunity for the new owners to expand the business and the partners did so by opening a larger factory and stores, something that was probably just what the old business needed; it grew into a thriving business, employing many more employees.

Adcock & Denham continued to produce large quantities of cigarettes, cigars, tobacco and snuff at a time when these products were popular and in high demand. It was said that around 40 staff of men and women were engaged solely on producing the company’s ‘Sure Shot’ cigar; apparently, they made an average of 2 million every year which were shipped around the world.

The business flourished further when Daniel’s son, Ernest, took over. The company moving to new and bigger premises in Pottergate Street, and a central depot was opened on Exchange Street and there were also shops in the Back of the Inns and even at King’s Lynn. The raw material necessary to make the firm’s products arriving regularly in Norwich from across the world in hogsheads, tierces or bales; the supplying countries included America, Cuba, Borneo, Java, Turkey, Sumatra, China and Japan.

But such was the type of business that it regularly attracted the attention of an Excise Officer who would arrive at the factory every day to:

‘Take care that the proper contribution is paid to the State for the privilege of manufacturing tobaccos.’

Alongside production and inspection of goods, it was also clear that Adcock & Denham was not only well run, but also had the well-being of its employees at heart. One report in 1904 stated:

‘Cigarette making is proceeding at full swing. Nimble hands, and the turn-out at the time of our visit appears to be sufficient to supply a very large army of smokers.’ They added: ‘The rooms are bright, airy and warm throughout, and the workers are cheerful, clean and tidy in appearance and evidently suffer no inconvenience or injury to health from the trade in which they are engaged.’

In 1936, the then head of the family firm, Ernest Daniel Adcock, died at his home at Glenhurst, in Eaton; he was aged 81 years. An artist, he showed his work at the Woodpecker Club, he had been one of the original members of Eaton Golf Club and among the first people in Norwich to own a motor car. His first was a Wolseley in 1903 – before the days of compulsory number plates.

Sources:
Men Who Have Made Norwich by Edward & Wilfred Burgess, 1903/4.
https://britastro.org/sites/default/files/Newbegin%20George%20James-13_organized.pdf
https://www.edp24.co.uk/lifestyle/from-a-spanish-prison-to-an-empire-built-on-cigars-1067442

4 thoughts on “Two Men into Tobacco, Cigars and Snuff!”