Apart from an ‘Introduction’, The story contained herein is a Myth! – maybe based on a traditional story – for the Hall was reputed to have had a ghost! It is a story that may once have been widely held but more than probably false or, at best, a misrepresentation of what may have been a truth sometime in the distant past. You decide!……..

Introduction to the locality;
According the the MyNorwich site: The name Breckles is thought to come from Brec a laes meaning ‘the meadow by newly cleared land’. In the Middle Ages Breckles was actually called Breccles Magna, Great Breccles and had two sister villages to either side of it, Stow Breccles and Breccles Parva (Little Breckles). Breccles Parva is one of the lost villages of Norfolk and is thought to be on the current Shropham Hall estate.

Archaeological finds of flint tools and weapons, as well as other artefacts, show that the area around Breckles has a long association with people and settlement. Within the square mile, are the sites of a medieval moated farm, earthworks associated with the medieval village, plus evidence of a possible Anglo-Saxon settlement. A Saxo-Norman Church still stands in the village with a magnificent round tower, Norman font and Medieval rood screen.

There is also a fabulous Elizabethan manor house, Breccles Hall, which retains the medieval spelling of the name and has its own colourful history. The Hall was host to several visits from important people including Elizabeth I; Queen Mary and Winston Churchill, as well as having its very own ghost. More recently Breckles played its part during the Second World War with its decoy airfield and had its fair share of interesting characters like John Stubbing who lived to the ripe old age of 107.

Our Story;
“If you visit the Elizabethan manor of Breccles Hall, [at Breckles] in Norfolk, do not go at midnight, for it is just possible that you might see a ghostly sight so terrible, so frightful, that men they say, die looking on it; men like Jim Mace, poacher, drunkard, and boaster:

One Christmas time in the early years of the last century, bombastic Jim was boozing with his pals in the local public house near Breccles Hall. It was late at night; outside crisp snow glistened in the steely light of a sharp-edged moon. In the hedges and trees fat partridges, bred by the local gentry as fodder for their guns and their tables, roosted silent and safe. And in the dark of his cottage the deaf old gamekeeper lay snoring in his bed.

As the merry night wore on, Jimmy and his cronies drank themselves silly. And their conversation grew as silly as they looked. They joked, and thought themselves mighty wits, though what they said, whether it had humour or not, no one sober could have told, for their speech by now was slurred beyond recognition. But all that party roared at every slobbered word, and each man cheered and stamped his feet. And between jokes they argued the toss, and boasted of their prowess as poacher or fighter, tale teller or wag, and each man thought himself that much grander than the next.

Until suddenly a poaching pal of Jimmy’s, the biggest swollen head of them all, upped to his feet. ”Jimmy and me,” he burbled, ”Jimmy and me is going’ ter have a brace o them fat partridge birds for Christmas. We’ll take our guns an’ shoot them down and that old keeper, why, he’s too deaf ter hear.” ”Now just you listen ter me, my boy,” said an old chap who had been sitting nearby, ”you just remember the coach and four.” For a blank faced moment, Jimmy’s pal stared at the old man, first to focus his eyes upon the old fellow, and then to make sense of the words in his drink-soaked brain.

Everybody knew about the ghostly coach and four that was said to come galloping down the Breccles Hall road at midnight now and then, when the hall was left unoccupied. Silently it came, speeding along till it stopped at the Hall door. And as it came, every window in the empty house lit up brightly, and inside, if you dared to look, which few had done, you saw a ball in full swing, the dancers swirling around the floor with gay abandon, though never a sound from mouth or gadding foot was heard. The coach would stop; footmen climb down, the coach door open. Then out would step a beautiful lady. And it was she, they say you must avoid, for she would look a man in the eyes and he’d drop dead where he stood.

The sozzled poacher knew the story, like everyone else in the bar that night. But the beer made him proud and fearless and full of hot courage. ”Tis nowt,” he said, scorning the old chap’s words. ”The Halls empty tonight,” – the old man mused quietly. But Jimmy’s pal wasn’t to be put off. With a nod, he pushed his way out of the pub, Jimmy close behind. ”We shall shoot all them ghosties an’ all!” he said as he left, and laughed. 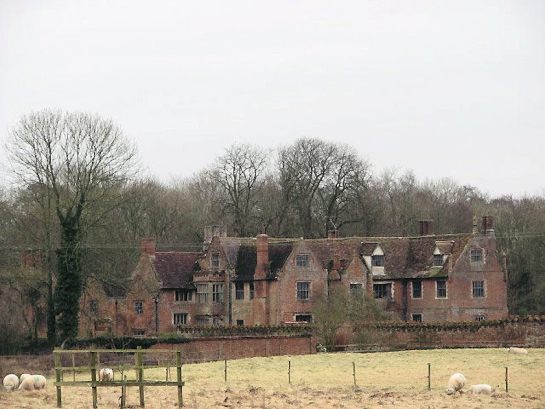 So Jimmy and his mate set off, full of Dutch courage. They called at Jimmy’s cottage and picked up a gun and a bag, and off they went into the nipping frost, searching the hedges for game. Drunk they might have been, but their shots found a mark or two and before long their bag was bulging and their craving satisfied. Till Jimmy remembered the empty Hall. ”Let us two go and rouse them boggarts,” he said, and his pal readily agreed; so off they went towards the house.

When they reached the mansion, the place was as quiet as the grave and black as the fireback. It towered over them, deep shadows where the windows were, like jet black eyes, and the snow-covered roof like a white wig. Jimmy stumbled up to the windowpane and tried to peer into the inner darkness. ”Don’t see no bogies,” he said, and he sounded almost disappointed. ”Try the door boy.” And he felt his way along the wall until he found the front door, a huge affair, and he rattled it against its locks. No sooner had he done so and then the village clock chimed out twelve strokes as clear as crystal, ringing on the freezing air of the still night. And as the last stroke sounded, round the corner of the Hall drive swept a coach and four. Its horses stepped high, but their pounding hooves struck no noise from the ground. Its lamps shone like yellow stars; its two footmen and the driver in front sat stiff and still as tailors’ dummies, their unblinking eyes glancing neither right nor left. Instantly, every window in the house lit up, ablaze with light, and the great front door, which jimmy only a moment before had shaken against its locks, swung wide open.

Cramped to the spot by fear and astonishment, the two men watched as the coach came closer and drew in by the door no more than a couple of feet from where they watched. Down the footmen climbed, just as everybody said they did, opened the carriage door, unfolded the steps and then stood back one to either side.

A second’s dreadful pause. Then from the coach, gracefully as only a woman can, came the most dazzlingly lovely lady the poor stricken poachers had ever seen in their simple lives. Her jewels winked from neck and arms and hands; her dress, flimsy as dawn mist, billowed about her. Down the carriage steps she came, reached the ground and raised her head. She looked straight into the transfixed eyes of Jimmy Mace!

For a while the world seemed to stop turning through space and time, to lose all meaning. Then slowly Jimmy opened his mouth and let out a long, stark piercing howl that sliced to the nerve of the silent winter night. That anguished cry brought Jimmy’s pal to his senses, and sobered him in a trice, and sent running off madly towards the village as if all the devils in hell were at his scampering heels. When he reached the houses, he ran from one to the next, calling frantically for help. But soon as he told his tale not a man would return with him to the Hall.

Next morning, however, the parson and some of the villagers did go there. Not a sign of the coach could they find, not a hoof print in the soft snow, not a wheel track anywhere. But lying in front of the main locked door of the magnificent old house was Jimmy Mace’s body, dead frozen, and with such a look of dread etched upon his face, that few men present could bear the sight. The mysterious, beautiful ghostly lady of Breccles Hall had gained another victim.