The following article appeared in the Eastern Daily Press on 2 February 1908:-

“A luminous owl (for there may be more than one!) was captured on Wednesday morning by Mr Edward Cannell at Lower Hellesdon and died from purely natural causes a few minutes afterwards.

A “John Knowlittle”, wrote “A Daily Press reporter, who has enquired into the circumstances, may be relied upon to weep for the luminous fowl. I have only to do with the facts, which are these”:-

“Mr Edward S Cannell is the engineer at the Norwich City Asylum (John Knowlittle will chuckle at that, I have no doubt) but Mr Cannell does not live at the Asylum – he is a trained and highly responsible man and is known to nearly everybody). I asked Mr Cannell to tell me how he came to find the owl.

“Yesterday morning” said Mr Cannell, between 6.00 and 6.30 when it was still dark, I went out into my garden. I had my dog with me. There is a grass bank about 2.5 feet high on one side and a grape vine on a wall on the other. I saw something shining on the grass bank, which for a moment startled me. It fluttered down, crossed the path and got up against the grape vine. I had no trouble in catching it and I did not hurt it in any way. It was an owl and it was bright and luminous. I should say that it was an ordinary owl, but the taxidermist will tell you all about that.

I carried it indoors and put it on a stool, then went out into the garden again. I do not think the dog saw the bird at all. When I came back into the house the bird was dying. It was still luminous, but perhaps the glow was not so strong as when I first saw it.

When I came into breakfast the bird was quite dead. Of course it was daylight then and I could see no luminosity in the bird; it’s light had gone out. I have no doubt at all that the bird was luminous when I saw it first. It was the diffused light which first attracted my attention. The luminosity appeared to me to be phosphorescent in its nature”. – “There are a number of owls that fly about among the trees at the Asylum every night but I have never seen a luminous one before”! 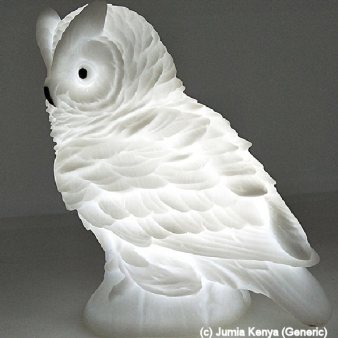