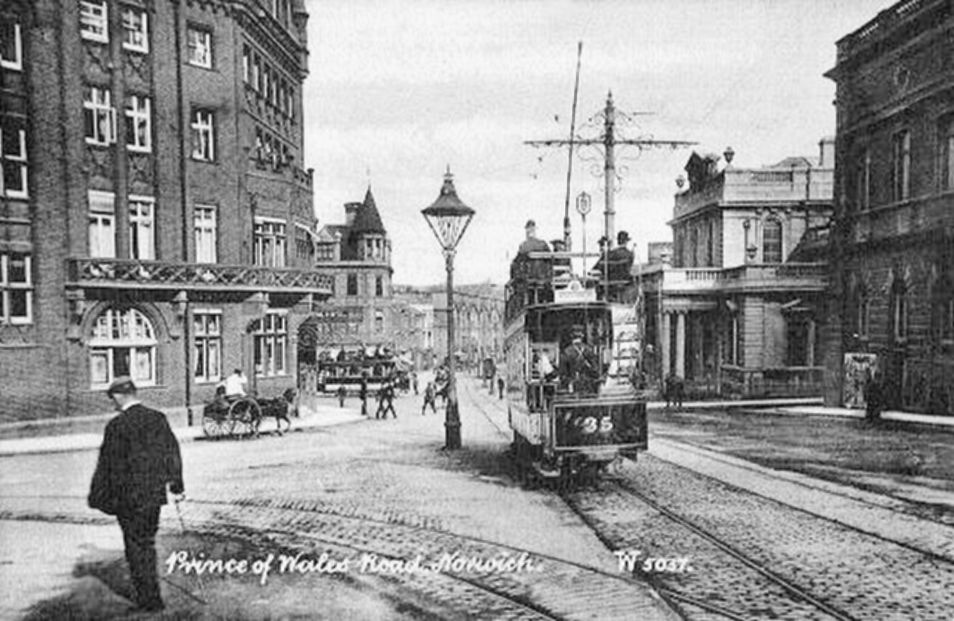 The Norwich Museum Service has, somewhere in its store, a small section of a Norwich tram-line which was salvaged at a point when the city’s tram system was being torn up and replaced by buses. To see such relics may be tempting to write a history of the trams that once ran on such lines, but this approach has already been more than adequately covered by other authors. Maybe, and this again would surely not be a first, we could simply take a step back in time and imagine a journey in one of the old Norwich trams along one of the city’s seven routes.

But first, a little background detail would help whilst we decide on which route to take:

So, let us imagine that we alight at Norwich Railway Station, at Thorpe Road in the east of the city, and intend to journey to a relative, or two, who live almost at the far end of the Dereham Road, by Merton Road and not far from Waterworks Road.

The first road of any significance that we travel is along Prince of Wales Road, an impressive road that was built as a direct link between passengers alighting from the railway station and the city.

We pass more than a few impressive buildings, including the new the Royal Hotel, only three years old in 1900 and also designed by Edward Boardman. Opposite is Hardwick House, built of Bath Stone some 34 years earlier than the tramway system and is of a grand neo-classical stone structure which presides over Agricultural Hall Plain. It competes with the Royal Hotel for looks because it is considered one of the city’s most architecturally elaborate buildings – said to resemble a tiered wedding cake. Designed in 1865 by the London architect, Philip Charles Hardwick (in partnership with his father), it had opened in January 1866 as a new premise for the Harvey and Hudson Bank and continued to be known as the Norwich Crown Bank 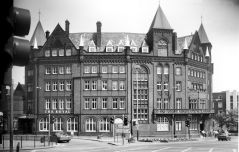 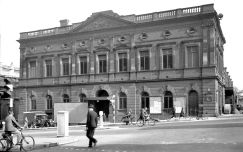 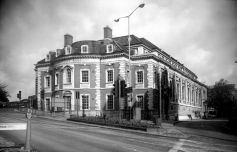 At this point we swing right into Bank Plain and on via Redwell Street to St Andrew Street, passing St Andrews Hall on the right, and Suckling House on the left, which in 1900 was separated into several private residences that were in a state of disrepair. 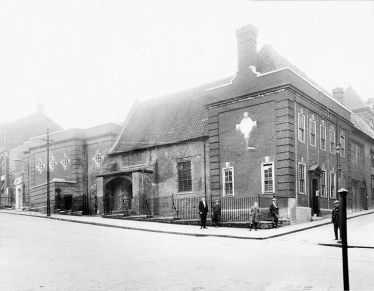 As our tram travels towards and along Charing Cross we pass Strangers Hall, beautifully preserved building that dates back to 1320 and was once the home to wealthy merchants and mayors when Norwich was in its heyday, but now a museum of local history since the 1930s. Though this building is a product of the Tudor period and dates back to around 1320, it may have been built for a merchant named Ralph de Middleton. Around 1450. William Barley rebuilt it, turning the structure on its axis to run parallel to the street, as it is seen. In 1530 the Lord Mayor of Norwich, Nicholas Sotherton, added a front door with the lovely carved porch and steps. Apart from that, the essential layout has hardly changed since the 17th century.

The name ‘Strangers’ was not given to the Hall until the 19th century, when the house was a residence for Catholic priests. By 1896 the priests had left, and Strangers Hall became derelict. A local developer planned to pull it down and develop the site but, fortunately, a Leonard Bolingbroke, solicitor and member of the Norfolk Archaeological Society, stepped in and purchased it. He filled the building with his own collection of antiques, and opened it to the public as a folk museum in 1900 – the very year when we passed by in a tramcar! At a time when most public museum were filled with rather dry displays of fossils and stuffed animals; the Strangers Hall museum was unusual; it featured objects from everyday life. Bolingbroke presented the Hall to the City of Norwich in 1922.

Many building were demolished or altered to make way for the new tram system. Norwich’s narrow, winding medieval streets were simply unsuitable for a mass transit system like a tram network. This is aptly demonstrated by the next stretch of our tram journey which takes us from Charring Cross on to St Benedict’s Street. The image below shows the approach to St Benedict’s Street just before the construction of the tram network.

The junction on which ‘The Three Pigeons’ public house stood was also where the 15th century mansion, belonging to the Quaker John Gurney, stood. The story goes that from the 7 September 1687 when John married Elizabeth Swanton, the couple lived there, and where a steep cobbled street ran down to his quay between St Miles bridge and Duke’s Palace bridge on the River Wensum.

John Gurney’s mansion was large and solid, commanding an important position at Charing, or Shearing Cross as it was also called – marking the ‘Plain’ where the main sheep-shearing had taken place for centuries. Such open spaces and town squares are still known in Norwich as ‘plains’ – (other examples passed through on this tram ride were Bank Plain and Agricultural Plain). A sketch is said to exist of the ‘Sign of the Three Pigeons’ in which the Gurneys lived, showing the large 15th century mansion standing in the fork of St Benedict Steet and West Wick Street. In John’s day these were called Over and Nether Westwyke. It was there where John’s wife, Elizabeth:

‘planted fruit trees in her garden and, living in the heart of the weaving industry, bought wool and flax, and handled distaff and spindles, though she could never have dressed her household in scarlett, and herself in purple, for quiet shades and pale colours were favoured by the Friends’.

The image above shows our tram about to head down St Benedicts Street, we will pass the Vine Tavern on the left hand side. Were we to look towards our right we would see the site of Bullards, brewer of much of Norwich’s beer. Here, some of our fellow passengers would likely to have vacated the tram on their way to work at the brewery.

St Benedict’s Street now houses a mix of alternative shops, restaurants, venues and pubs. In 1900 it was rather more conventional, but still housed a vast array of business’s. Keep in mind that St Benedicts Street is just 500m long, but consider this – we will pass a total of 14 pubs, 6 butchers and 3 tobacconists.

As we travel these short 500 meters we would notice Frank Kirby’s bicycle shop at number 5 St Benedict’s Street, Brett’s furniture shop at number 12, and at Number 19, Cooke’s, a musical instrument seller. At number 56 will be Hugh Manes umbrella repair shop, at 63 the chemist and druggist, Edward Making. Then at number 98, William Burtles coffee rooms – 14 pubs and only 1 coffee shop. How things have changed!

The Kelly’s Norfolk guide of 1900 lists the shops, pubs and other businesses which were operating on St Benedict’s Street during that time. This list would make interesting reading for those who research such things:

From this point, the tram will enter Dereham Road and the biggest difference we will see, between the period of our imagined journey and the present day, is the lack of cars. In 1900 fewer than 1% of the population has access to a motor car. Those not traveling by tram or by horse would likely be walking, the pavements were busier places in 1900!

Our journey reaches its end about half a mile along Dereham Road, just before Merton Road. With the journey over, you now have a short walk to the home of your relatives. Amaze them with the copy of a similar tram journey – to be made in Norwich, two year hence, in 1902. Just think – you can show them this film on your laptop, by just clicking on the following link as supplied by the:- East Anglian Film Archive !

NOTICE: ‘Norfolk Tales, Myths & More!’ is a ‘non-commercial’ and ‘non-profit making Site which publishes items which are considered deserving of wider exposure. In pursuing this aim, the Group endeavours, where possible, to obtain permission to use another owner’s material. However, for various reasons, (i.e. identification of, and means of communicating with owners), contact can sometimes be difficult or impossible to established. Nevertheless, please rest assured that any known and appropriate ‘credits’ and ‘links’ back to sources, are always given in our articles. No violation of any copyright or trademark material is ever intentional.