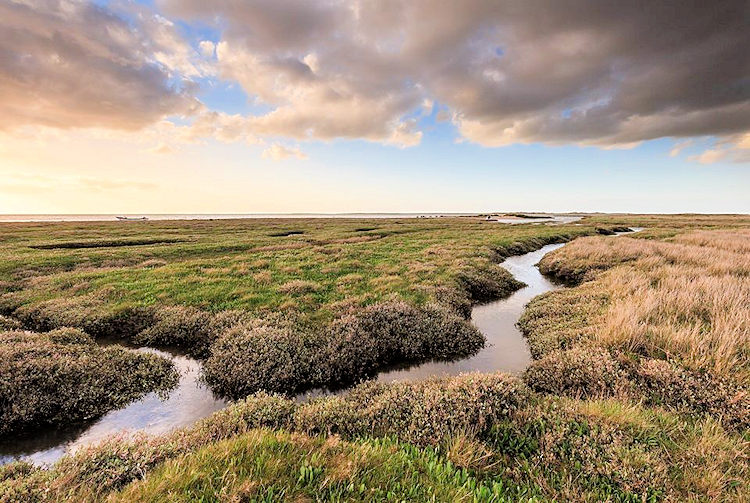 Apart from an ‘Introduction’, The story contained herein is a Myth! – maybe based on a traditional story where ghosts emerge out of the sort of variable weather that one can find at Skiffkey! It is a story that may once have been widely believed – but possibly false or, at best, a misrepresentation of what may have happened sometime in the distant past. You decide!……..

Introduction;
The village of Stiffkey lies on the North Norfolk coast, along the A149 coast road between Wells-Next-The-Sea and Morston. The name of Stiffkey derives from the tree stumps that are found in the marsh – the area of which is referred to as ‘tree-stump island’. Skiffkey is a beautiful village consisting largely of flint and brick cottages, built on the banks of the charming River Stiffkey which is bridged just into the Langham road. The river, with its little, narrow, confining valley is quite attractive during summer months and never seems to lose its way as it flows through the village on its way to the sea at Stiffkey Freshes. There was once a harbour at Stiffkey, but it has long been completely silted up – the reason why those ‘Blues’ of old grew so fondly attached to the area.

The main street of Skiffkey is narrow and winding and is bordered on both sides by high walls – making it a dangerous place for pedestrians, also something of a nightmare for motorists – especially in the busy summer months when tourists pass through from afar. In fact, for those who venture through the village by car, van or lorry for the first time they would immediately notice one thing – the road is not only extremely narrow, but has no pavement between the flint walls and road. In the height of the summer tourist season this feature sometimes contributes to the occasional ‘incident’ caused by vehicles which choose to joist with others, often resulting in damaged paintwork at best or dented bodywork and, frequently, displaced side mirrors. It is also not the place for the faint hearted or for those who like to test their prowess at speeding. Patience is required! 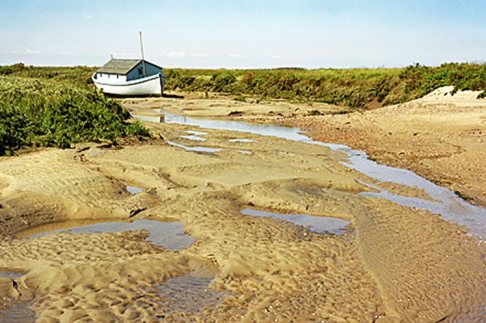 Our Story:
In the small village of Stiffkey, out on the salt marshes is a large mud bank called Blacknock, which is the site of a ghostly haunting. Stiffkey is famous for its blue cockles, and in the 18th century these were gathered by the women of Stiffkey. It was hard and potentially dangerous work as the tides race in, cruel and fast over these marshes. But the Cocklers of Stiffkey were tough women, they had to be. With their weathered faces, dressed in pieces of sacking for warmth, they trawled the marshes for cockles. 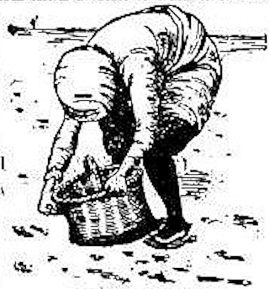 Once collected, the cockles had to be hauled back in large sacks to the village, without help of man or beast. It was no wonder that the women of Stiffkey were known thereabouts as Amazons, given their strength and hardiness. You had to be tough to be a Stiffkey Cockler. On one particular day the Stiffkey women were out as usual gathering the ‘Stewkey Blues’……

We all told her, but she wouldn’t listen, not her. Her mother was the same, stubborn as a mule. Her mother was a Stiffkey Cockler as well, but at least she died in her bed, not like her poor daughter.

It’s hard work cockling. You get paid by the sack so if you come back with only half a sack then you, or one of your children, might have to go hungry. We have to carry those sacks, full of cockles, all the way back to the village; you can’t get no mule out there, not out on those sand banks. But we’re tough, tough as old leather. That’s why they call us Amazons hereabouts. Though being tough don’t make it any easier when we lose one of our own.

But she wouldn’t listen……

We all saw that the tide was turning; turning fast and the weather was closing in quick. That’s why we packed up. None of us, apart from Nancy, had a full sack – but half a sack, your life and a night with an empty stomach is better than no life at all. So, we left the girl. Left her out there by herself still gathering cockles out on Blacknock whilst we all came back; came back home to our families and to safety.

There was nothing we could have done, she wouldn’t listen. Who could have known it was going to get that bad – and that quickly. Of course, when she realised the danger it was too late, the roke (fog) had descended. No way could she find her way back. I don’t even think Nancy could have found her way back in a roke like that. Not even with all her years of experience.

Our men folk tried to get to the girl. Well they could hear her see! Out there in their boats on the sea they could hear her calling and a screaming for help. My man said he even heard her cursing and swearing; raging against the roke and the tide – even against God himself! Then all of a sudden, he said, there was silence and he could hear her no more, none of them could. So, they turned back – had to – too risky in all that roke in a boat when you can’t see where the mud banks be.

She’s still out there of course! No, not her body; No!, that we found the next day. Still had her knife clasped in her hand and her sack, a way off still just half full. Seaweed there was, all tangled up in her hair and her eyes. Well, her eyes they were open, glaring one might say, glaring at the injustice of it all. No, it’s not her body out there, that be in the churchyard, but her spirit, her restless spirit, that’s still out there. Now I can’t spend my time gossiping I’ve got to get on, got to get back and feed my family. 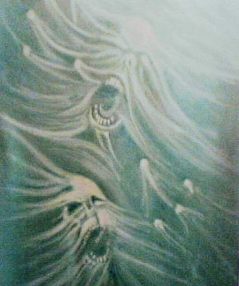 No, it’s not ‘cause of the tide; the tide has already turned and it’s on its way back out…… But there’ll be a fog tonight; you can already see it beginning to roll in from the sea……It’s her, she’s always much worse on foggy nights, much more restless and noisier – probably ‘cause it was foggy when she drowned……No, she’s far worse on foggy nights. On foggy nights you may even see her; with all that seaweed still in her hair. So, you don’t want to be thinking about going out there, not by yourself, not out on Blacknock sandbank!