When studying a map of Norfolk & Suffolk, the number of coastal locations including those with ports or harbours, soon becomes apparent. Some have past connections with very famous people or famous events, an obvious example perhaps being Burnham Thorpe in Norfolk, now inland but once, also a port and the birthplace of Horatio Nelson. Or Burnham Overy perhaps, where Nelson first learned to sail a boat, but a few miles further down is Wells-next-the Sea, now a noted fishing port but once regularly visited by colliers, coasters and grain-carrying vessels as well. But how many people know of John Fryer, born in Wells on 15th August 1753 and why he became a famous name in Norfolk’s history?

Educated locally, John Fryer then acquired a keen interest in the sea, joining the Royal Navy at an early age and becoming a Master of the Third Rate, in 1781. He was then serving aboard HMS Camel, a 44-gunner vessel (previously named HMS Mediator). After a few more years at sea, Fryer moved to the HMAV Bounty, subsequently made famous by the mutiny aboard her, on 28 April 1789 which has since been commemorated by books, films, and popular songs.

The Bounty began life as the collier Bethia, built in 1784 at Blaydes shipyard in Hull and costing £1,950. But on 26th May 1787, she was purchased by the Royal Navy for £ 2,600, for a single mission during which she would travel from Britain to Tahiti and collect some breadfruit plants. These would be transported to the West Indies, where hopefully, they would grow well enough and also become a cheap source of food, for the slaves there. So during 1787, the Bethia was refitted at Deptford and renamed Bounty, as a relatively small three-masted and fully-rigged sailing ship of 215 tons. After conversion, she mounted only four4-pounders (2 kg cannon) and ten swivel guns. Her ‘great cabin’ was converted to house the potted breadfruit plants, and gratings were added to the upper deck, for ventilation and her complement would be 46 officers and men.

Meanwhile on 20th August 1787, John Fryer was appointed Sailing Master of the Bounty by the Admiralty, with Fletcher Christianas Master’s Mate and William Bligh as Captain. Little happened until 23rd December 1787, when the ship sailed from Britain for Tahiti. Then on 10th January 1788, Captain William Bligh put his crew on three watches, giving one of them to Christian and on 2nd March, ordered that Christian be promoted to Acting Lieutenant. Some speculated this fuelled the ill-will which later developed between Fryer and Bligh. When the voyage began, Bligh highly approved of John Fryer, his Sailing Master: “The Master is a very good man, and gives me every satisfaction.” he said. But his feelings soon changed, most likely because the Master was not a ‘yes-man’. He had strong opinions of his own and although he was not as sensitive to insults as Christian, Fryer was conscious of his dignity and competence and made Bligh aware in no uncertain terms, that he would not take things “lying down.” Despite this, John Fryer remained loyal, accompanying Bligh to Timor, but during the outward voyage, Bligh demoted the ship’s sailing master, John Fryer, replacing him with Fletcher Christian. This seriously damaged their relationship and Fryer would later claim Bligh’s act was entirely personal.

When the Bounty and 46 crew sailed from Timor, the unusual consignment greatly reduced the officers’ cabin space and almost added ‘an arboretum’ to the quarter deck undermining Bligh’s power to command as the space he controlled as captain had also been affected. Modification of the ship even meant there were too many men in too little space for too long a period of time. Tension increased en route and finally boiled over when the prospect of life in a Tahitian paradise seemed possible/ After this, came the famous “Mutiny on the Bounty” of 28th April 1789, led by Fletcher Christian against the commanding officer William Bligh. But John Fryer was the only officer who forcefully attempted talking Christian out of his hasty decision. When that failed, he made an earnest, but equally unsuccessful attempt to mediate between Christian and Bligh.

Finally, he was among those who forcefully demanded the loyalists be given the Bounty’s launch instead of one of two other boats which were unseaworthy. At one point Christian pressed his bayonet against Fryer’s chest, saying he would run him through if he advanced one inch further. John Fryer had the interesting position of being a strong critic of both William Bligh and mutiny leader, Fletcher Christian, even at one time accusing Bligh of favouring Christian. Despite his anger at Bligh, Fryer did not support the mutiny. Bligh’s account of this vilified Fryer (vilified means to slander or speak ill of someone), who merely gave fair evidence at Bligh’s court-martial. Edward Christian, Fletcher’s brother, was assisted by Fryer in publishing a counterweight to Bligh’s version.

Bounty had finally reached Tahiti on 26 October 1788, after ten months at sea and following the famous mutiny, eighteen mutineers finally set Captain Bligh and 18 of the 22 crew loyal to him afloat in a small boat. The mutineers then variously settled on Pitcairn Island or in Tahiti and eventually, Fletcher Christian took the vessel to an isolated South Pacific island, which they reached in Jan 1790. There, they burned her to avoid detection and to prevent desertion. Interestingly, as a direct result of this, a colony was established and inhabitants of the 1¾ square mile Pitcairn Islands inhabitants are therefore direct descendants of the mutineers and their former Tahitian wives. Even the present-day islanders now speak a dialect, said to be a hybrid of Tahitian and 18th century English. But no reason explaining why the Mutiny ever happened at all, was ever offered. Historically, Bligh and his remaining crew of 18 made an epic and eventful journey in the small boat to Timor in the Dutch East Indies where they spent five months. Subsequently, Bligh returned to England and reported the mutiny.

On retiring from the Royal Navy on 6th April 1812, John Fryer returned to his home town of Wells-Next-the-Sea where he died on 26th May, 1817 – ironically, also the same year as the death of Captain Bligh. He was buried in the churchyard of St Nicholas at Wells but in 2000, his gravestone was moved into the main church building, on the south side. Meanwhile in the churchyard and replacing his original grave site, is now a plaque to John Fryer, Master of the Bounty. 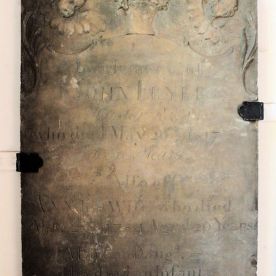 That Fryer received no promotions after the Mutiny is incorrect. He rose to the rank of Post Captain and served as Commander of at least 3 ships: HMS Serapis, 1801, HMS William, 1804, and HMS Abundance, 1806. Although a Master, the title was only considered a courtesy. In more recent times, Daniel Day-Lewis portrayed him in the 1984 film ’The Bounty’. A biography of Fryer was edited by Owen Rutter in 1939: John Fryer of the Bounty (Golden Cockerel Press)

Norfolk, United Kingdom
Please make use the appropriate buttons below to follow us on Facebook and to receive email notifications about new postings.
Join 367 other followers