On reclaimed marshland where the most frequent visitors are birds, the site of St Andrew’s Church at Wickhampton was once covered by sea, now it stands as a lonely beacon on the haunting expanse of Halvergate marsh. It is a place which inspires calm – unlike the story attached to the stone effigies it guards. Many childhood generations have been told the heartrending and cautionary tale of two local brothers who took extreme measures to resolve their differences; it warns against sibling wars.

It was during the reign of Edward I that Wickhampton, on the marshes near Breydon Water, was a place of fishing, fine hunting and with a farm and a church; the neighbouring village of Halvergate was rich in arable land and seen as the better of the two villages for it boasted many fine farms and a fine church.

Sir William Gerbygge owned both villages and he and his two sons, Gilbert, the elder son, and William managed the estate. It was a fine estate, the rich farmland produced bountiful crops, while livestock thrived on the damp verdant pastures, which also provided hay for the winter months. Wildlife abounded, providing fine sport and hunting. The sons were very fortunate, a fact that Sir William was forever reminding them. But the brothers were quarrelsome and jealous and their father often had to reproach them. 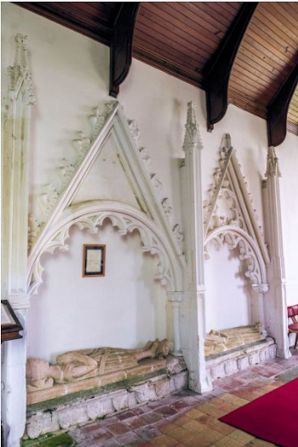 Gilbert, the elder son, wanted the better of the inheritance and his possessive gaze took in all that was good, frequently using the word “my”, to the annoyance of his brother and the villagers. But William was strong and had a sharp mind, frequently quarrelling with his brother and driving his father to his wits end to know how best to distribute his lands after his death. He eventually left Wickhampton to William and the better of the two villages, Halvergate, to Gilbert. He made known of his Will and prayed for peace as he breathed his last. But, after his death, there would be little peace. At first Gilbert and William wanted to at least give the impression that they were both pleased with their respective inheritances; when they met, they would make a point of shaking hands – which was noted by the quiet villagers with a cynical nod as they could see the storm clouds gathering. In fact, the two brothers were to spend years arguing over their respective lands, with neither brother conceding; gradually, the dispute became bitter and finally, became violent.

It happened at ploughing time of one particular year, when the folk looked forward to another good season. There was a field, just north of Wickhampton church which projected far into the boundary of Halvergate, and Gilbert saw this as an opportunity. He called to his brother who happened to be close by, “That field should be mine. It is an obvious mistake, made when the boundaries were drawn”. William replied coolly “You already have enough…….no mistake was made”. But the impetuous Gilbert, angry that he could not sway his younger brother, jumped from his saddle, rushed over to William and pulled him from his horse. “I will have my way” he shouted, striking William with his bare hands.

The two brothers then attacked each other with increasing ferocity that frightened the folk who had gathered around to watch the fight. Gilbert and William tore at each other with bare hands, at the edge of the field over which they disagreed. They grasped for hair to pull out by its roots, ears to rent, fingers, legs, arms and noses which were scratched, pulled and twisted with unreasoning and inhuman fury. The differences, pent up over the years, were released as they became snarling and snorting animals. The villagers dared not to intervene.

As the blood began to flow and the fighting became ever more intense, a demonic fury gripped the two brothers. Their finger nails appeared to grow longer, their teeth became fangs, their eyes widened and the villagers gazed on in silence. The brothers tore at each other’s throats and breasts with devilish roars in what became their final fight. Then, strange as it would appear and precisely at the same point in time, the brothers tore the hearts from each other with their bare hands in a final burst of malice. They lay upon the ground, lifeless – as one would expect! The awestruck onlookers then saw a divine figure overhead, some said it was an angel, others said no – it was God who was so appalled by the brother’s behaviour that he instantly turned them both to stone to atone for such sins and as a warning to others. God also ensured that the stone fingers of each brother would remain clutching the heart of the other. Local villagers bore the stone corpses – together with the clutched hearts – into the church to serve as a reminder of the perils of fighting. As for the brothers’ lands; they were renamed Wicked Hampton, now shortened to Wickhampton, and Hell Fire Gate, now known as Halvergate. Legend also has it that, over time, one brother’s heart has been worn away leaving just one grasping a heart with the other next to him.

But there is more to St Andrew’s church than a legend, standing as it does in a secluded rural location on the wide open Halvergate marshes where the Yare Valley seems to contain any excitement it may have of reaching the sea. We are still four miles from the coast and there is nothing hereabouts until you reach Yarmouth except – the haunting flatness. Five-hundred years ago, St Andrews stood on the edge of a wide inlet, but the silting up of the estuary over the years left its tower as a beacon for nothing else other river boats.

The dedication of the church to St Andrew seems appropriate; he is the patron saint of fishermen, and Wickhampton is said to have been a fishing community which supported a population of around 500 inhabitants and had direct access to the river Yare. The church was built in the 13th century, but it seems very likely that an earlier church stood on the same spot for at least several hundred years before that. The earliest part of the church is the 13th century tower. The nave was rebuilt around 1340, and the chancel and south porch were added in the 15th century.

That said, the most interesting historic feature of St Andrews church is a series of 14th century wall paintings which are simply staggering, and the detail is remarkable. They were hidden by plaster at the Reformation and only came to light again during restoration in 1840 by the Diocesan architect Richard Phipson, someone criticised for over doing it! However, many wallpaintings of this kind were lost when liturgical patterns changed in the 15th century, a full century before the Reformation when perpendicular windows often destroyed such decorations when punched through them. But the three main subjects at Wickhampton are pretty well complete. They sit on the north wall with the largest, at the extreme westend, being the best surviving depiction in Norfolk of the Three Living and Three Dead. The theme was a common one in medieval art; the frailty of human life and the certainty of mortality. Three kings are shown hunting, and they meet three skeletons in a wood. They give the kings a warning,

The final wall painting shows The Seven Acts of Mercy and The Resurrection, which illustrates people Feeding the Hungry, Giving Drink to the Thirsty, Clothing the Naked, Visiting the Prisoner, Receiving the Stranger, Visiting the Sick, and Burying the Dead. In a largely illiterate society, these images acted as as colourful reminder to churchgoers of the sort of behaviour that was expected of medieval Christians. The message is driven home in the final scene, showing Christ raising his hand in a gesture of blessing.

According to Simon Knott: The Seven Works of Mercy were, and are, a Catholic catechetical tool, designed to help the faithful follow the teachings of Christ with regard to strangers as set forth in Chapter 25 of St Matthew’s Gospel. By meditating on these images, the worshippers could ensure they were carrying out this advice in their daily lives. The faithful are called upon to feed the hungry, to give water to the thirsty, to clothe the naked, to give shelter to the homeless, to visit the sick, to comfort the prisoner, and to bury the dead. The way in which meditative images could be used to follow their example give us an insight into the way in which medieval Christianity was practiced in the days before congregational worship became the norm. The illustrations at Wickhampton are stunning in their simplicity and emotion. The Burying of the Dead panel in particular deserves to be as well-known as any 14th century Christian image in the Victoria and Albert Museum, and yet here it is, in an isolated church on the edge of a wild Norfolk marshland.

There are, of course, other features of historic interest in the church beyond the wall paintings. The pulpit is late Elizabethan, while the benches in the nave are Victorian, in the style of the Jacobean period. A single original Jacobean bench end survives in the chancel. In the nave hangs a royal coat of arms to George I, dated 1737. The organ came from Freethorpe Manor and is housed in an 1810 mahogany cabinet made by George Pike. Near the south door is an ancient parish chest. In its traditional place opposite the entrance is a painting of St Christopher carrying the Christ Child. You can still see swarms of fish around St Christopher’s feet, perhaps another sign of Wickhampton’s once-thriving fishing industry.

To visit Wickhampton church will provide an unforgettable experience. The church seems stranded, lost in time, with no obvious village left to serve, but the superb wall paintings speak of a long and rich past, now lost, when this rural backwater was a busy place, full of life, and providing the roots of a possible sibling feud – one which led to a legend!